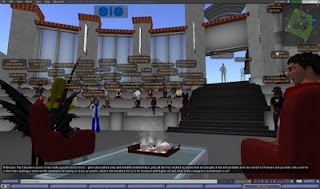 Educational meetings attended: 3 (mostly good); Problems with Voice: 1 (bad); Strange transporations and crashes: several (bad); No. of eminent researchers sitting on lap: 1 (amusing)
As well as seeking out virtual bonsai, bubble chairs and valentine freebies, have manged to fit in some work-related activities. First picture shows AJ's weekly educational discussion, where Pathfinder Linden held forth. This was a week ago, and must confess that remembrance of what he said seems to have leached away. 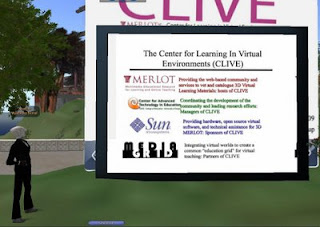 Passing swiftly to an event that is fresher in the memory, on Monday attended the SL Researchers meeting. Brainwave Bernal was talking about the CLIVE (Center for Learning in Virtual Environments) project, and Salamander, i.e. efforts to tag and record learning objects in SL. In UK most efforts to get academics to upload and share stuff have been pretty unsuccessful, since a) academics are not sharing creatures; b) universities aren't sharing organisations and c) who wants to use other people's stuff anyway? By the time you've hacked it around enough that your students recognise it as relevant to them, you might as well start from scratch.
However, having said that, certainly HAVE used other people's stuff in SL, rather more than in RL. Is this because it is more fun to hack around? Hmmm. 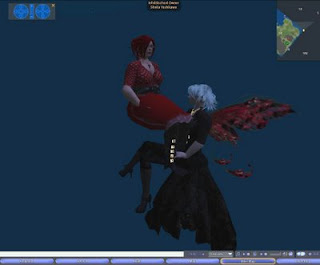 Was attending this and next meeting from home using mobile 3G stick. Stick appeared to be particularly challenged. To start with could scarecly move, then when attempted to sit down was apparently whisked to corner of sim (0,0,0) and Aussie researcher Seeker was sitting on my knee (see picture). Even wierder, SHE evidently saw herself back in the meeting place and was carrying out text chat with people there. Having struggled back, waited for Brainwave to start his presentation. By time he had worked through 3 slides in perfect silence had deduced that he was using Voice and I wasn't hearing it despite having Voice active. Fixed it by logging out and in, but really must stir self to get a proper broadband connection. 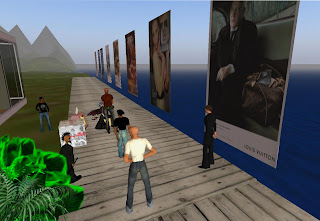 After this meeting, whizzed straight over to the Educator's Coop where Metaphor Voom talked about the v. interesting things he was doing. Students select RL adverts which show human bodies, put them on billboards in SL and embed notecards with critique about the ad. Metaphor had prepared a template board with notecard so they only had to master a few SLskills. He felt that they were interacting more with each other's work and we agreed that having them on large boards had an impact. The layout was also newbie-friendly.
At this meeting I spent whole time on a box, since (a tip) in my belagged situation it was easier to sit on a box and move that round by editing it, than to try and walk about. BTW you may have noticed wings, cute eh, but possibly also a bit twee, so will not be wearing them in front of students or indeed the Vice Chancellor.
Posted by Sheila Yoshikawa at 17:58