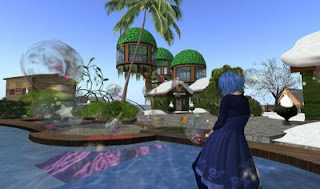 SL demos given: 3 (v. good); Vice Chancellors kowtowed to: 1 (good); Tiki spa & pool combos bought: 1 (good, but bad); Strange pants glitches encountered 1 (v.v.bad)
Demo to VC seemed to go pretty well. Schedule was that colleagues started off with Wimba demo, then he was shepherded off to see student multimedia, during which time I swapped SL onto the big screen. Some mild panic since 1) he zipped through our exhibits faster than expected and 2) I spent some time fiddling with connection to data projector before it and my laptop would consent to collaborate.

However, got it sorted out in time and plus side of him getting ahead was that I had nearly 15 mins in SL rather than expected 5. Maggie, Pancha, Graham and Lulu appeared to say Hi and prove that there is Life in SL. He asked some sensible questions and I managed to get in bit about students not having adequate access in the central labs, so hey ho will have to see whether anything comes of this in long run. 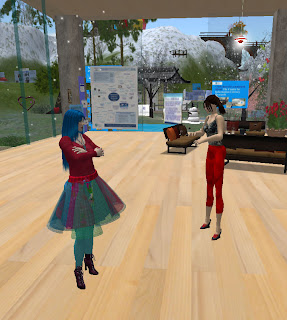 Other 2 SL demos were to new batch of Educational Informatics students on Friday, and as quick prelude to talk given this evening as part of CILASS programme. Was wittering on about Inquiry Based Learning in SL, trotting out rather too many research frameworks for learning & teaching and ruminating on how they applied to SL. However, am getting some thoughts together about disciplinarity and SL and if only could apply self to these thoughts with same enthusiasm as that which is employed in shopping, then sure that great educational leaps forward would be made.
On shopping front, decided to splurge on prefab poolside complex, which have arranged at one end of Educational Informatics village. First picture shows me on the Bubble Chair circle, which have installed in one of the pools. Second picture shows me encountering a student in the CILR at the weekend.

Also have (of course) bought more clothes, but most notable clothing incident was embarrassing one of realising that all textures had disappeared from lower half. 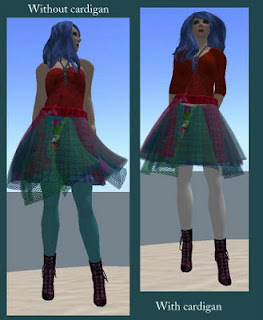 This meant that underpants, pants, socks and skin on lower half were not showing, so was just white and featureless. This was actually less embarrassing than if skin had remained, since being totally white and featureless made it less Rude. Eventually discovered that this was happening because I was wearing a red Swallowtail cardigan - picture shows me WITH cardigan (and without lower textures) and WITHOUT cardigan (and thus WITH glitch pants and teal-coloured tights). I retained my skirt for modesty. Have since discovered that have same problem with red Korutsobaki cardigan which is one of my favourites and certainly this didn't used to cause problems. Odd.
Posted by Sheila Yoshikawa at 15:54