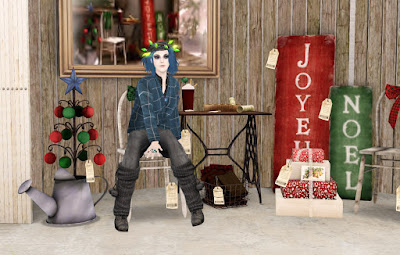 No. blog posts written in digital writing month: 1 (bad); No of stories written in digital writing month: 0.5 (could be worse); No. of items on shopping list: 35 approx. (bad)
Have failed singularly to increase amount of Yoshikawa blogging during digital writing month, as month has flashed past oozing with teaching, family emergencies, storms, meetings and cute SL items that SIMPLY HAVE TO BE BOUGHT.
In fact had decided that thing wanted to do more of was not digital writing but uninterrupted sustained writing (USW), as in getting into flow of writing for a couple of hours so imagination can take wing and so forth. In fact managed about 1.5 hours of USW on train between London and Sheffield, so partial achievement. Have also peered through window at digital writing activities, so to speak. Would have been fun to join in, but v. time consuming. One digital writing challenge was doing something transmedia, and was pondering extent to which SL is transmedian in itself. Could argue that is just one environment, on other hand have sound, pictures and movement and can zip about between different locations and import things in and out of SL. Is probably substance for whole, dull, peer reviewed article in debating this.

Anyway, did find time for some Christmas shopping as deluge of cute Xmas cheer kicked in as soon as the pumpkins and scary Halloween skeletons had been collected up into inventory. Thought that might be able to limit Xmas expenditure by going through all the events and making up a shopping list in advance, so am not tempted to buy anything extra. However not sure that this will work, e.g. for Lost and Found event my initial advance list ran 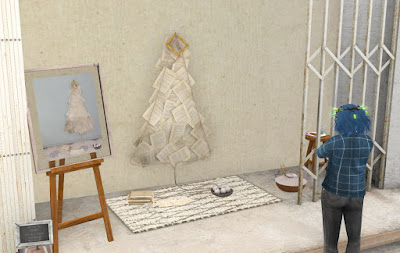 Kalopsia and plaaka are familiar puveyors of cute things, and although cabinet was on expensive side, all the items on cabinet shelves are v. cool e.g. artisan japanese ceramic bowls and tea whisk.
When tp-ed to Lost and Found was still impressed by cabinet. Decided that already had enough piles of presents, but the crackers were nice and the sewing table reminded me of the old treadle sewing machine that we had when was young (though it has to be said that nostalgia has already led me to buy 2 different SL reproductions of this treadle sewing machine, however don't have table without machine, so obvious gap in inventory).1st pic shows me stoutly resisting urge to also buy decorated Xmas chair, watering can with artful bauble tree in it etc.
However was drawn inexorably to the display of boots by Deadwool. They are v. realistic all wrinkled leather and laces. Suffice it to say that they cost 450 Linden and am now wearing them with my new Go! dress and Atomic woollen legwarmers. All very boho.

Eye was also caught by SariSari upcycled Christmas tree, a snip at 299 Linden. Well, in fact not PARTICULARLY a snip, but v. well made.Was more charming than in advert and could immediately see it being an amusing conversation piece in my new Fallingwater House art gallery. In fact had thought it came with a nubbly cotton rug (see 2nd pic) which proved not to be the case, but  am not too disappointed.

Can see from this account that future does not look promising for list approach, since started out intending to spend max of 480 Linden and spent nearly that on unplanned boots. Oh well. 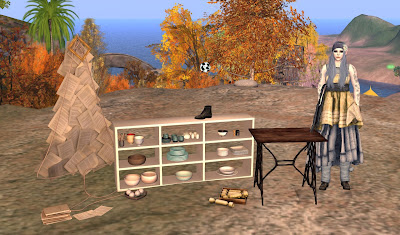 3rd pic shows me with the acquired consumer items. Am wearing boots but also have displayed one on top of cabinet.

So, this is the kind of thing I was doing instead of digital writing.

I must say, it seems pretty transmedia to me.

Posted by Sheila Yoshikawa at 14:03