Panic; Consumption; kittycats; the old round 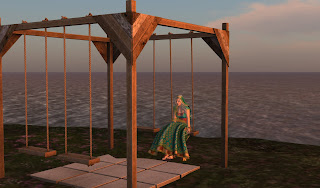 No. of months since last blogged: 5 (bad); No. of cat cafes opened in intervening period: 3 (good); No. of lindens spent on flimflam: countless (v.bad)
Had sudden panic today when spotted that was 5 months since had last blogged. As noted previously, decided that this blog is for idle pleasure, so should not feel guilt when neglect it. However, am also aware that Great God Blogger deletes blogs if has been no activity for long time. Think long time is longer than 5 months, but would be v.v.v.v. bad if all of Yoshikawa's adventurous musings fell into the black hole of a blogger clean-up.
So what has happened in Yoshikawaland in past 5 months?
1) Goes without saying that have continued SL shopaholic madness e.g. today was FIFTY LINDEN FRIDAY so bought various treats each a 50 linden bargain, namely:
- texture change deckchairs
- a set comprising a small table, some pen and paper and an ornamented lampshade displaying views of Paris
- a swing for 4 people
- a cute summer dress from Pixicat
- a set of whitewashed wall panels
This is a picture of me on the swing. Only drawback is that poses only include v. gentle swaying, rather than proper swing. Probably as well given that 4 seats are rather close together, could otherwise end in AVATAR COLLISION 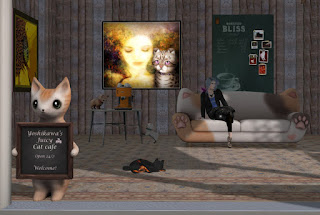 2) Have also opened cat cafes in Juicy, Noyo and a completely new place that Dimitrova is renting because it's a really cute location, and how could you not? Will do more pics, but this one will do for now.

3) Continue with journal club although ZOMG have not publicised the one for next week, so perhaps enthusiasm waning a bit.

4) Also still on VWER team and facilitated last night, was a lively discussion as they say.

5) When have time wander round SL going oh ah this is so pretty and doing artistic selfies posing on waterlilies/ rustic benches/ dystopian industrial wastelands/ rococco daybeds (as appropriate) then posting pics on flickr to modest acclaim.

Posted by Sheila Yoshikawa at 14:13

Yay! Welcome back to the Blogging World

Five months? How could you keep us waiting so long. I will go on a tour of Cat Cafes immediately

I think that blogging can be a bit like belonging to the gym. When you go you feel a small sense of satisfaction - but you know you could try harder. Then when you don't do it you feel bad and spend time alternately admonishing yourself and then trying to be defiantly relaxed.
A solution in both cases is to eat chocolate.