Madness that is the quarterly Arcade gacha is upon us again. As reminder, gachas are money sinks: will contain supercute selection of items, you throw in your 50 Linden or whatever, and out comes the randomly selected item that you least wanted to own. Arcade is king of gacha events, with all top names in cute stuff designing items to extract lindens from purse.

Is pointless trying to get into Arcade itself in first week or so, so have been browsing yardsales. Yardsales are places where can offload gacha duplicates, or can at least hope that having 18 Apple Fall "side tables with plant" will sound v. appealing to some random shopaholic.
Thus zillions of Zaara's fishermans pants and Dustbunny's vintage towel rolls (the stall with the huge pile of boxes is Dustbunny one), and v. few rare Zaara chill tents or Dustbunny cute houses. Shown in pic is The Pea yardsale, which is at least organised i.e. the plots are in alphabetical order of designer. This is improvement on most of them, where principle is that people hire booths and shove in whatever they like, so e.g. if searching for the Truth hair in Colours, have to go round all the booths with fine tooth (or should that be truth) (well perhaps not) comb.

Most attractive yardsale is at la Venta (or is it Las Ventas? can't be bothered to check) where not only in alphabetical order but display vendor pic showing what all the items are. This is v. useful as since can be seen in 1st pic, above, box containing items generally gives no clue as to what is within.
Will not list all gacha items bought, as would be too embarrassing/tedious, but may be able to see one purchase in 1st pic, viz unicorn companion which is standing beside me. 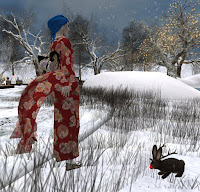 Is definite vogue for attachable companions, already have wombat, pig, and various other creatures the species of which escapes me, but this is first unicorn. Has leopard patterned skin, which was not something that I though RL mythical unicorns normally had. Was only about 49 Lindens and is cute (it walks when I walk, it gallops when I run etc.)  although is no use when one sits down as simply then have unicorn body parts poking out of the cushions.
2nd pic shows another creature, namely a jackalope, which had completely foregotten about but found in SL pics folder when searched on word "gatcha". Think was meant to be cross between rabbit and red nosed reindeer. Pic was taken Christmas 2012, so likely this rare breed is extinct by now.
Have attracted COMMENTS for last post which is doubtless why have bothered to do another blog post so quickly.  Feel obliged therefore to put some utility into post, namely:
a) link to yardsale list on the Seraphim site: http://seraphimsl.com/2015/05/31/the-yardsale-list-jun-aug-2015/
b) SLURLS for the cat cafes:
- Juicy Cat Cafe (one kittycat):  (this is a rather minamalist cat cafe as only have 25 prims to play with, but have selection of coffees and cute cat themed sofa, as well as the kittycat) http://maps.secondlife.com/secondlife/Juicy/73/174/25
- Eagle rise cat cafe: (one kittycat; she's on the main decking): http://maps.secondlife.com/secondlife/Eagle%20Rise/151/4/21
- Shore Thing Cafe: (5 kittycats): http://maps.secondlife.com/secondlife/Infolit%20iSchool/64/160/22
- Sakura Cat Cafe, Noyo: (lots of kittycats): http://maps.secondlife.com/secondlife/Noyo/188/32/47
Kittycats spend good deal of time asleep: can try waking them up but do not always respond. If awake they will roll, and run around, chase butterflies etc. Is possible for anyone to pet them and they may possibly come up to you and make personal remarks which are meant to be be cute. All can say was, it wasn't me that programmed them.

Posted by Sheila Yoshikawa at 20:02