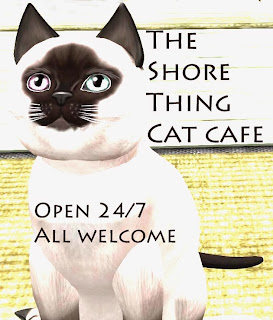 No. of cat cafes set up: 1 (good); No. of new kittycats acquired for cafe: 2 (v.v. cute); % by which kittycat food bill goes up: 25% (bad); No. of people who think I am creepy, lonely, antisocial and altogether ought to get out more into the FRESH AIR: approx. thousands (bad)

So week of Yoshikawa on FutureLearn Play MOOC has come and gone (i.e. last week) in which generally speaking politest thing that people said was that SL was not for them, am exaggerating for effect though not outrageously. Talk of SL creepiness etc. was somewhat dampening of spirits as difficult not to take personally (was tempted to thrust Facebooks pics on them shrieking "Look I have friends!" or perhaps as Facebook also virtual that not such effective strategy, think only solution would be videos of me hiking in woods with friends and family whilst doing good for some charity or other).

But heyho SL has kittycats and whilst one has kittycats who can be downhearted, they frolic, they sleep in cute poses, they sit at your feet and ask to play and nowadays they rarely disappear under floorboards which is bonus. As relaxation and inspired by RL cat cafe that visited, as noted in last post, have created the Shore Thing Cat Cafe which is now OPEN FOR BUSINESS though of course all food and drink is free, it being pixels. Is in particular v. wide range of cakes, and drinks include champagne chilling in bucket. 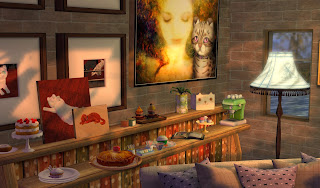 This pic is most popular of cafe shots on Flickr and shows corner with assorted cakes etc. and pics of the cat cafe cats plus one rather professional pic by Nina Heartsdale who does cute mashups of kittycat pictures with artworks. Decided to give visitors a range of cats, so did indeed buy black cat was shown viewing in last post. He is now full grown and called Hawthorn, and have invested in teacup kittycat (so tiny!) which is Siamese chocolate tortie. The other 3 are Jennifer (Bengal snow), Snowflake Morpho (Advent cat) and Sabrina (Firestorm), so colours for all tastes. Hmm, perhaps that statement is catist, obviously also each cat has own personality and is not constrained by gender, breed or colour. Hmm again also note that may be heteronormative element to kittycats since can only be Male or Female and can only pair up a male and a female kittycat for breeding purposes, and not possible e.g. to form kittycat civil partnerships. But will pass on from this to wallow in cuteness once more.

SL cat cafe Merchandise and a Facebook page are logical next steps. But why stop there. Am now dreaming of extending empire to Noyo and beyond. Could have minimalist cat cafe on Juicy (minimalist, as am allowed only 25 prims, ie.e. 2 kittycats a cake and a cup of tea). Next stop, the grid! Soon there could be a Yoshikawa cat cafe in every continent! People would be snapping up the virtual cute cat cafe t-shirts! and mugs! Cute cat cafe videos on Youtube! It could go viral! 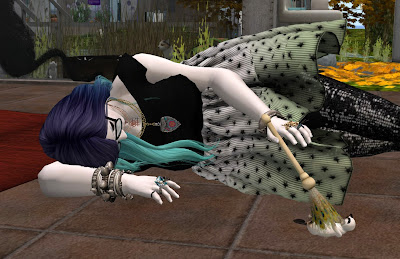 On the other hand it could just consume hours and hours of my time, but since I am apparently creepy, sad, antisocial and weird am sure there are lots WORSE things could be doing.

Will finish with pic of me tickling Praline. ZOMG she is so cute.
Posted by Sheila Yoshikawa at 06:01