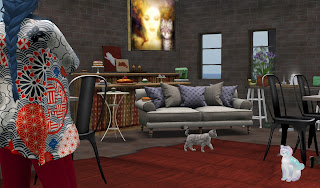 No of cats transferred to cat cafe: 3 (good); No. of comments on Futurelearn MOOC; not so many as last week (reassuring); Houses bought: 2 (good); Percentage of required preparation for future presentations/life/work successfully completed: not nearly enough (bad)

Whereas should be setting up useful posters for newbies, decluttering, preparing landmark givers, constructing items which simply yet effectively tell the story of information literacy (etc etc) in preparation for the possibly-not-hordes of people storming into Infolit iSchool because of the Play MOOC, am in fact in process of constructing the Infolit iSchool Cat cafe. This is inspired by a cat cafe in London, which recently visited and v. nice it was too although really rather competitive as all the people visiting the cafe wanted the cats to spontaneously love THEM, and if that didn't happen, to photograph the cats in cute poses.

In SL is a bit simpler as kittycats periodically tell me they love me in text chat and unless they are asleep then anyone can pet them as much as they want.

Have almost finished cafe in new L2 Studios home. Spent oodles of lindens to secure 2 very neat sets of tables and chairs in a gacha (also got 2 sofas, 4 odd tinny decorations and a musical bear surplus to requirements, but that's gachas for you). Sofa in pic doesn't match in colour, but was from latest round of collabor88 and cushions have little cats on so nice touch. Have absolutely loads of random food items in inventory and is mostly a matter of which ones to pull out. 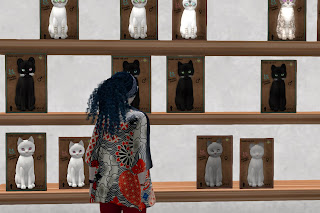 2nd pic is of Tassie, felt that she was telling me NO I do NOT want to work in a cat cafe. However didn't get that vibe from Jennifer and Snowflake Morpho so there they are settling in (1st pic). Have now added Serena the Firestorm cat who technically belongs to Zoe, but of course Zoe is my puppet and does what she's told being 2nd Alternative Avatar.

Is terrifically tempting to use cafe as excuse to buy more kittycats. Visited sim which is basically devoted to stalls and shops vending kittycats i.e.it is one giant kittycat shop. Was very taken with a couple of them notably the black kittycat with odessey (mismatched) eyes (middle row on far left). Also almost got sucked into real-time cat auction, with about 15 people gathered round bidding on 10 assorted cats including an absolutely adorable teacup (tiny) cat (shown) below, but would have to bid at least 1000 Linden and let's face it already have several kitty boxes in inventory (offspring of Tassie, Marl etc.) 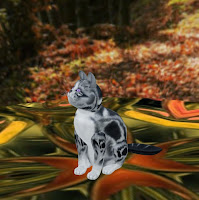 That black one is very cute, though. Very.