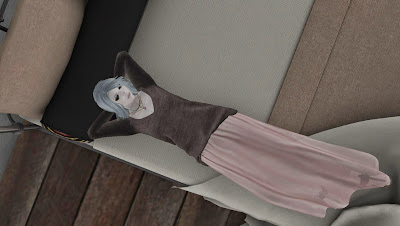 No. of people registered to MOOC on Play: 15000 (scarey); No. of comments in MOOCs first day: c. 2000 (distracting); No. of hats, shoes, tops, skirts and trousers snapped up in sales: too many too mention (bad); No. of items purchased which have crows in them: 2 (good)

So as can be seen from last non-statistic, consumerist life being pursued as per normal. Tulip is having closing down sale which is v. sad as they do nice hair, and also, as now almost too late discover, nice clothes. Here I am posing on bed in new L2 Designs show house wearing floaty boho skirt and warm jumper. Fatpacked on the skirts as they seemed Just The Thing, and also bought a couple of jumpers and various trousers, oh and also pair of cute turquoise suede wedges. 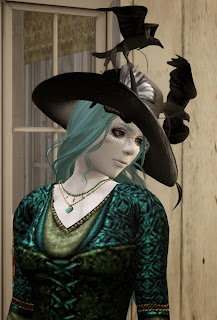 Crow items were from some event, have already forgotten official name, but anyway it was focusing on Poe and so there were various Crow-ish items (Nevermore etc.) including this hat and a crow in a birdcage. Don't usually go in for hats but in fact am shown here wearing 2: namely a butterfly one with a net veil, and the crows. Spent a short while wondering whether crows were alive or not. They don't move or make sounds so inclined to think, not. Then paused for thought: some people might think was weird to wonder whether something ONLY COMPOSED OF PIXELS was alive or dead. Hmm.

Moving on, also bought cute changing rooms and shop chairs from Cleo Designs. In fact when TPed in to buy them, the creator, Cleo herself, was there. Should have taken a pic but instead got v. fangirlish and thanked her gushingly for her creations (which are also, it should be noted v. reasonably priced AND are copy/mod). Am shown below in changing room trying on new Truth hair (called Dariela, think will get it in Pastel colours)

Should have been doing more marking, but instead was distracted not just, ahem, by virtual shopping but also by MOOC (Massive Open Online Course) which is indeed Massive since 15000 people - that's *15000 PEOPLE* - are registered. Sheila Yoshikawa features in week 6 talking about SL and Play, plus a token amount of SL and Information behaviour which managed to sneak in. Not sure how many peeps will be left by week 6, but at moment comments are zooming in and not just one liners, all sorts of deep and interesting stuff so is v. tempting to just dip in and out all day. 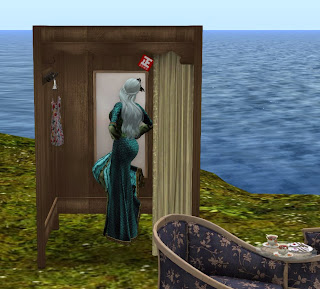 As readers will know, am not one to resist temptation, so tomorrow will have to take self firmly in hand and decree no MOOC and no SL until certain things are MARKED and AWAY.

Was going to do a blog post with profound thoughts about how reading MOOCers comments about childhood play have given me further Great Thoughts about SL and play and how in fact I appear to be carrying on various activities from childhood into SL dotage (collecting shiny things! dollshouses! dressing up box! being a princess! etc. etc etc.)

However, as usual, talking about shopping is rather more fun. Makes better pictures, too.

Posted by Sheila Yoshikawa at 14:55