Gone cats; on Comments; too much stuff 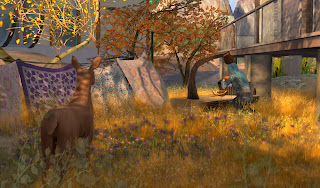 Comments on fashion blog: 2 (bad); Cats disappearing into Lost and Found: 7 (very very bad); Amount of cute stuff that can be bought at SL events: limitless (so bad, it becomes good again)
My Blueness fashion blog is attracting comments, but alas not from what one might call discerning punters. Indeed a sceptical reader might think people were spamming the blog to advertise some tawdry search engine optimisation services. First comment reads "Its such as you read my thoughts! You appear to understand so much approximately this, like you wrote the e book in it or something. I believe that you can do with some percent to drive the message home a little bit, however instead of that, that is magnificent blog. A fantastic read. I’ll definitely be back."

This so barely hangs together as English that it almost becomes poetry (really awful poetry, obviously). Quality of the prose is probably explained by next comment

"I read a lot of interesting posts here. Probably you spend a lot of time writing, i know how to save you a lot of time, there is an online tool that creates high quality, SEO friendly articles in minutes, just search in google – laranitas free content source". Is evident that author A must have been using services being peddled by author B and in my view should ask for their money back, though the phrase "like you wrote the e book in it or something" has a certain ring to it.
Makes me nostalgic for the early days of spam where either messages were lovingly handcrafted by spamming maestros, or consisted of random chunks of text welded together with no regard for sentence structure, punctuation or meaning.

Moving on, had been looking at fashion blog because just posted new outfit (see above) presenting just a few of the many items hoovered up at recent SL events. The Arcade! Kustom 9! We Love Roleplay! Jewelery Fair! The Chapter Four! Basically, there is just too much cute stuff to be had, and my inventory is stuffed to the limit (i.e. 71,000 items) with things so delightful have never even opened the box let alone worn them. 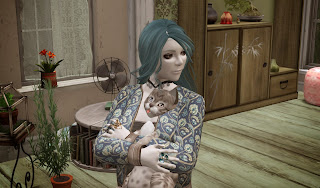 Could have disquisition on moral decay of Western Society here (what kind of world is it where spend money on virtual hat consisting of giant butterfly, when should be doing marking?) however will move on swiftly to Case of The Disappearing Kitties. Was going quietly about normal business in SL, setting up a picture shot of me carving pumpkins amongst autumnal trees and grass (see first pic), when realised that item which had just rezzed was more than the prim count that I had left on the land. Strange.
Turned out that this was because SL had decided to send into Lost and Found
- 7 assorted kittycats
- 1 folding chair
- 1 set of washing, on a line.
Items are all scripted, but then so are oodles of other things. To cut long story short, kitties are returned to their homes, but still seems to be some kind of aftermath in which when "holding" a kitty animation does not work, so get unfortunate effect as pictured here with Marl.

Perhaps  is revenge of the spammers for sending their comments straight to spam.
Posted by Sheila Yoshikawa at 17:55