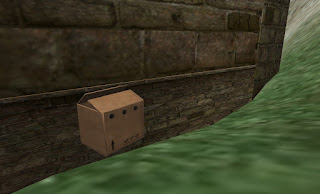 No. of new kitten boxes: 1 (exciting!)
Finally succumbed to temptation to let my kittycats create beautiful kitten boxes together. Set Snowfall and Tassie to "breed on" a few weeks ago, which meant that at once was having to shell out more Linden for kittycat food as breedable cats eat twice as much. Then after about 10 days set Tassie to partner Snowfall. Tassie made some coy remark about only having just met (as if! she was there when he emerged from the kitten box, there is photographic prooof) which evidently comes from the kittycat random-twee-remark generator.

Have not been in SL much for the last week, and therefore was surprised and delighted to get an IM announcing the happy event (i.e. Tassie giving birth to a kitten box). When went inworld at first was unable to locate a) kitten box b) Tassie or c) Snowfall. After some camming around discovered a) (Kittenbox) abandoned outside the house (see first pic) b) (Tassie: fond mother) chasing butterflies round the opposite side of the house and c) (Snowfall: proud father) hiding under the floorboards. Seems like the new kitten box is doomed to be the victim of a dysfunctional family right from the start. 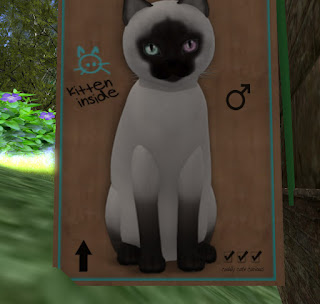 The new update allows you to click on the kitten box and see a 2D portait of the yet-unborn kitten, so you can decide whether to birth it or not. Obviously once it has looked at you with its v. cute whiskers and pretty ears it is more difficult to resist. Look! He has his mother's eyes, they are so adorable! (etc. etc.) And he would make a charming mate for Ninetails, in only a few weeks they could be making kitten boxes of their own. It is a primrose path to pouring linden into the kittycats coffers (i.e. for more and more food).

Should note that this breeding thing is a frightfully chaste process, as apart from eating more kittycat kibble there is no noticeable change in kitty behaviour and certainly no Lewd Acts. Once had retrieved Snowfall from under the floor and Tassie from her walk outside the house, let them wander round until they fortuitously both ended up trapped by a japanese screen, and I took a picture (3rd pic, Tassie is on the right) 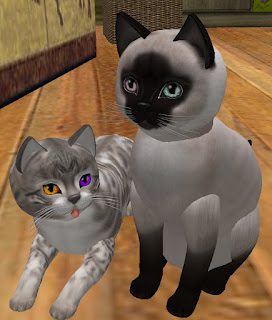 They may be saying "let our kittenbox live". Or they may be thinking "when is our next kittycat kibble meal". Or as they are in fact pixel cats, it is also possible that they are not thinking anything at all.

BTW if you have any views one way or the other, feel free to comment on whether Son of Tassie should be released from his box to eat up my Linden.

Posted by Sheila Yoshikawa at 19:12

I would advise be cautious - it adds up to a ridiculous amount of RL coinage rather sooner than one thinks.

Thanks for the advice!