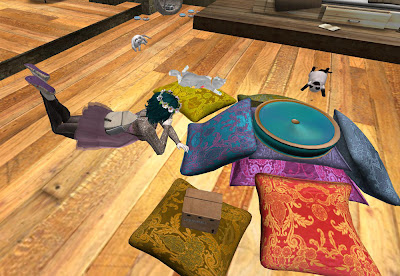 No items in inventory: 58,000 (good); No. of items in inventory when logged in last night: 19,600 (v. bad)
Was procrastinating on Infolit iSchool last night, changing some furniture in the Wilf Saunders library, when thought would try rezzing some possible replacement builds. Need to consult Maggie first, but as demolishing common room to put up a conference centre, am considering making library into library/social venue. Am sure David Cameron would approve, as he and his chums always seem to be encouraging librarians to do things librarians have been doing for years e.g. lending CDs and selling coffee.
Anyway, was only when kept getting no hits in inventory search that finally realised that was not because too many items are in wrong folder. Was, rather, because NONE OF THE FOLDERS HAD ANYTHING IN THEM. 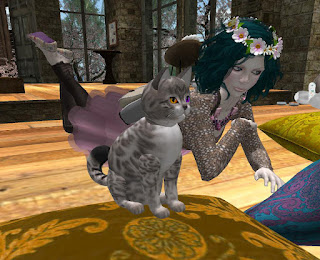 Icey finger of fear clutched at heart, but did some quick googling, and soon came across  lots of Don't Panic messages which indicated that was most likely that inventory wasn't loading. Followed some instructions from Rolig Loon (who must spend all her lifelife doing helpful posts) and within reasonable time inventory was cascading back into inventory folder.* Phew!

As a reaction to this decided to create new pixel life, so rezzed a kitten box I had purchased foolishly a couple of months ago and lo! there is a new kittycat for me to cuddle. It is a Bengal cat, with Odessey eyes i.e. they are different colours. Cute or what. Have called him Snowfall. This makes 6 cats altogether which is seriously approaching crazy cat lady territory, particularly when you look at the price of KittyCats food. First pic shows us all waiting for the kitten box to hatch, and 2nd pic shows Snowfall though at that point he was still just called Kitten. 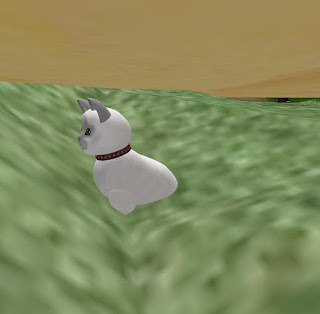 Stone looked distinctly unenthused at the idea of a new male cat on his territory, and has taken to hiding under the floor even more often (see 3rd pic). Meanwhile, Ninetails is now full sized, but Snowfall is still at that age where he could get lost underneath a cushion, let alone underneath the house.

Whilst in Kitteycats main store noticed there was a HUD that enabled you to get your kitties to return to you even when you don't know where they are.
Hmmmmm. On one hand may regret not buying it if really do lose cat completely one day. On other hand, have been Hunting the Lost Virtual Cat for 5 years now, ever since Mitsy started throwing herself into sea on Eduserv island. It's a sort of ritual.  And at least kittycats don't disintegrate into disembodied paws and heads like Mitsy did.

BTW am also labouring at a serious post on "Twitter vs. SL" reflecting on experience of Twitter-only discussion about info literacy. Will of course be last word on the matter of Twitter vs SL and do not offer any prizes for guessing which one is winner in my book. Do they have kittycats on Twitter, who whimsically hide themselves under the floor and behind the furniture?** I rest my case.

*Practical info. To get inventory back, cleared cache (in Preferences, think it was Advanced tab), logged off, logged back in somewhere else and typed an "a" into the search box of inventory, then waited impatiently as the inventory count went up and up.
** the answer is "no".

Posted by Sheila Yoshikawa at 21:10