Was taking some pictures this morning e.g. of this truck that crashed into side of new house when it slowly dawned that THERE WAS NO COWELL SEASIDE VILLAGE ANY MORE. At first had just assumed had set draw distance to a low figure and therefore wasn't seeing this pretty village which was the key reason for getting the land in the first place.

However, checked draw distance, realised could see things that were FURTHER AWAY (i.e. Abotts spacedrome) and eventually flew over to find that one whole sim's worth plus a bit more had been abandoned and was set for sale. This is what it looked like just now. You can see a bit of what it looked like BEFORE in the final pic in this post http://adventuresofyoshikawa.blogspot.co.uk/2011/09/usual.html and Chimera posted some pics here http://www.koinup.com/works/in-second-life/on-pictures/tag/cowell/ 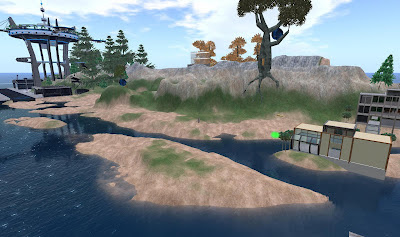 It had a bit of a retro feel as it hadn't changed from when I discovered it in 2007, but still charm and atmosphere.

But not any more, it is an ex-village. Had panic attack thinking of dreadful things that could arrive there, and in grip of this got Dimitrova (since it is less disasterous for her tier charges) to buy up one chunk that includes the nearest half of the island bit and a slice going over the mountain on the right (it was all lumped in together). Will think what to do by Dimi's tier date in a week; can't afford to increase my tier overall, but would like to keep at least the island bit as a cushion, and could sell off a bit of what have at the moment....

Posted by Sheila Yoshikawa at 07:20