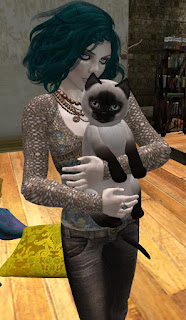 Emails received from virtual cats: 10 (good); Visibility of mesh: erratic (bad); Tail positions: unfortunate (v. bad)
Was overwhelmed with emails from Stone and Tassie on Monday demanding food and attention. Such an improvement on RL cats which can only meowl and look pained, not only have SL cats mastered email skills, also can tell me preceisely how hungry they are e.g. "40%".
Fortunately got to them before they were 100% hungry as at that point they retire to their themometers and blankets and linden must be paid to get them back to good health. Here I am showing Tassie I care, using cute "hold" pose. Is only one thing wrong with this pose, as can be seen if look closely at pic. Prompts thoughts such as "is that a kittycat you are holding or are you just glad to see me?" Would probably be good idea if kittycat tail vanished in this animation, or at least coiled discretely out of sight.

Am wearing new hair from Truth, but expenditure has been curbed somewhat as am being v. cautious about buying mesh clothes. Was incident of being filmed by Pancha when wearing nice mesh sweater and hair and looking like I had no torso but a bald head, and also when bumped into Kali and friends and it emerged that they were using non-mesh viewers.  Can't imagine why anyone who doesn't know what mesh is would read this blog, but anyway, mesh is new way of making stuff, using computer aided design; like sculpties, but it's not sculpties, it's mesh. Plus side of mesh is that it can curve to follow your avatar movements, minus is that you can't resize it if it's this flexible "rigged mesh". 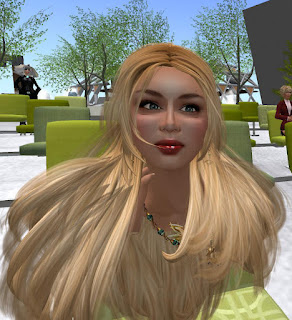 Thus to fit different sized avis you get several sizes of (e.g.) the dress, which is all very well, but they are "standard size", which means you end up a standard size rather than your actual shape. This generally means buxom, with a small waist and biggish hips but a flat bottom. Do not want to be that shape. Combo of ill-fitting clothes and social embarrassment of having vital bits missing = avoidance of mesh.

Am also myself finding that when come across new mesh objects they are invisible first time round e.g. try on a mesh skirt and it looks like it isn't there. Relog and magically I can see it. Increasing numbers of people at meetings are thus suffering from bits-missing syndrome e.g. in VWER today there was chap who was mostly just head and extremities, and last week there was a woman was was mostly hair (see pic): very nice hair too, went off after the meeting to find the shop. 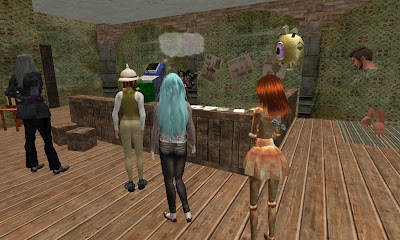 Next pic also shows mesh issue (see chap on far right, look no body) in after-VWER visit to a bot-shop where was being shown the Quasimodo Merlin bot (the one with steampunk wings: actually realise now that you can't really see him in this pic, he is hidden by my Big Hair, that thought bubble is coming out of his head). Quasimodo was eccentric bot who disliked people he had only just been introduced to (he actually said "I dislike x", x being Suzanne who was just trying to make polite conversation with him). Therefore ended up being something of a bait-the-bot session, though in a polite educators sort of way. Quasi has been programmed to write vogon poetry and his poem for me on the subject of "Jubilee" was as follows (copyright to him, obviously)
"among shops futuristic jubilee
Label interpreted jubilee!
You extended parkey.
Out of the water, budgeted bugbee.
All taste fielded plumlee.
Good and plenty, allocated lordy.
Sheilas suit entertains parkey"

Could spend hours deconstructing this. The first lines seem to be corruscating commentary on the extent to which the Queen's Diamond Jubilee has been turned in a commercial event. "Parkey" is of course reference to popular but ageing UK TV personality Michael Parkinson, a former chat show host. "You extended parkey" must be compliment to the dedicatee (me) implying that my witty repartee would stretch Parkey's powers, and indeed provide him and his audience with entertainment ("Sheilas suit entertains"). This appears to be in contrast with some dull minor royal who has been foisted onto Parkey as a guest ("allocated lordy") with an affected plummy accent ("fielded plumlee"). Not sure about the fourth line. Perhaps there has been flooding, but fortunately there is sufficient Parkinson Show budget to mop it up so we are "out of the water".

And to finish with, here I am balancing on a table. 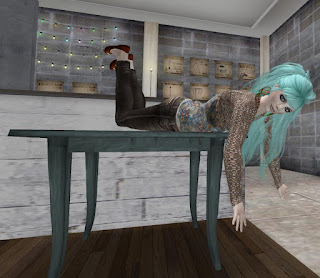 Posted by Sheila Yoshikawa at 17:23