I Thought I Was So Over Julia Hathor 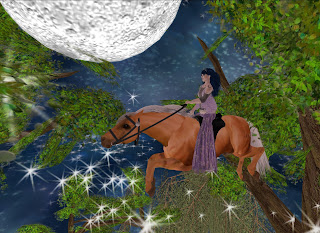 Although have dozens of houses in inventory, some unrezzed, was prepared to be captivated by some new residence at the Home and Gardens Expo. What had not expected was to be right-click-select-buy-ing on an item by Julia Hathor.
Now, Julia Hathor was designer of first treehouse on Infolit iSchool, in fact at one point island was positive shrine to Hathor, since also had Fairy Bridge, Magic Apple Tree Bridge and Magic Apple Tree. 2 apple tree items are still in situ, near hobbit home (even though pose on Magic Apple Tree went wonky, so you get swallowed by the tree), but tree house and bridge have gone way of all prims, i.e. deleted in favour of newer items.
Old tree house had a waterfall grove at the bottom, spiral staircases (impossible to negotiate, one of the reasons it went), elegant viewing terraces, a splashy pool halfway up the tree, and a nice patio nook with cushions at the top, plus lanterns, nature sounds and some sort of bird of prey. Have numerous pics (e.g. here) of Ishbel and I floating in the pool, Marilena posing elegantly at the poolside, teaching meetings in the top treehouse room etc. Feel quite nostalgic just writing about it. 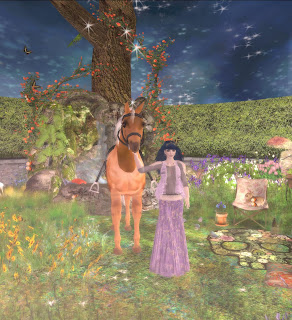 However don't think was just nostalgia that prompted the click-buy. Products definitely seem improved, but basically as soon as entered moon garden, all with moonbeam twinkles and lush grass and meditation pads and a waterfall and a cool tree-climbing animation - it is is all just SO PRETTY and so SL that I thought - blow realistic baked-in shadows and artfuly distressed concrete - this is Magic.

Was going to replace greenhouse with moon garden, but as noted yesterday, have decided greenhouse is too cute to delete, so it was summery coast house that went. Did a fraps of the house before deleting.
With 600 prims at disposal, rezzed moon garden and set about decorating. The thing about a Hathor garden is that it is pretty much loaded with stuff already, but think sometimes you just have to go over the top, so piled on some more plants, a bird bath, a bird feeder, birds, beer, knitting, more birds, buterflies, more plants, more butterflies and a cute rabbit. I put on my fairy crown and rode my fairy steed around, for added effect. 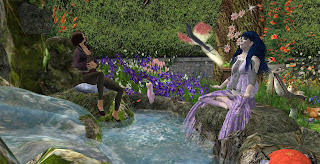 Yesterday got Pancha to come along and lounge with me by the waterfall. Think this makes the cuteness complete.
Posted by Sheila Yoshikawa at 17:28