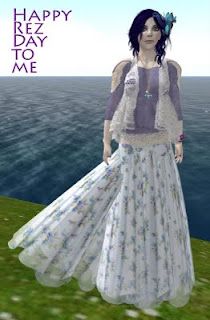 Years in SL: 4 (good); No. of rez day greetings: one (better than nothing)
Have not tended to make much fuss about rez days, though had toyed with idea of having a party this year. Am not v. good party person since generally assume that will be disaster and no-one will turn up. However, more to point, am snowed under with work, plus have been handicapped on SL front because:

1) Have been away from office for 2 weeks and therefore dependent on laptop for SL fun;

2) Said laptop started making clunkety-clunk noises about 12 days ago, never a good sound for a laptop. Think bit might have got loose and interfered with fan. Laptop did not crash, but hope to get good bit more mileage from it, so am not risking using it til it's been (hopefully) fixed by Samsung Laptop Expert.

3) Seized by laptop deprivation, made impulse purchase of cute Samsung mini-laptop. Whilst have bonded with new purchase for blogging and suchlike as is lighter, smaller and has more battery life (plus was cool conference accessory), is basically carp as regards SL. Can get onto SL, but spends ages being grey, graphics never resolve properly even on lowest settings, and it sort of flickers periodically. Therefore is OK for emergency SL (collecting & sending IMs etc.) but not for much else. 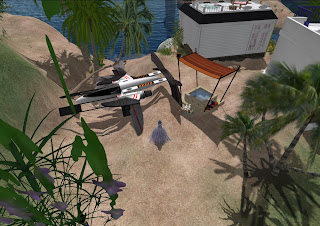 Thus, no time for party organisation. Was even late for first time with 52 weeks of colour posting, so posted Periwinkle on Saturday and then today celebrated with Tangerine (this week's colour) and then pics of rez day outfit, also seen above. Floaty eh. Will wear it for LILAC conference report meeting tomorrow, though possibly minus the butterfly hair corsage.

Checked up on land: as usual several things had crashed into my parcel in Noyo e.g. this jet fighter and had to return them.

Also made sure cats were ok: turned up they needed updating (you can tell this because they have Update Me in red hovertext above them). Update included exciting new animation, Play. When click cat and then click Animation and then click Play and then click Yes when asked Is It Ok To Animate Your Avatar then you do a throwing-the-tiny-coloured-ball animation, and if all goes to plan, cat starts patting and chasing tiny coloured ball, very cute. Only problems were: 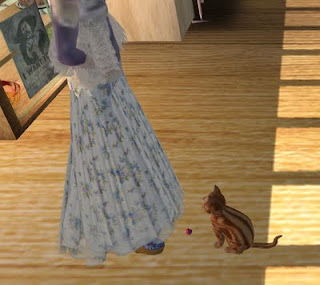 1. When had Played with Quilt and then clicked Quilt again to get Qulit to jump to be cuddled, Quilt obstinately refused and started chasing ball further and further away, well outside her cat range. In end got her to Jump Home.
2) When tried Play with Naomi later, she was stuck in a corner and kept ignoring the ball, so I got her to jump home. Then started to click Play again, but it crashed. So may be a few bugs in animation.
Also, is tendency for ball to get stuck under sofa or behind chairs, in which case cat sits and stares at it until you come and retrieve the ball for her. This seems somewhat like RL. Cutest thing is probably when cat picks up ball and drops it at your feet (first cat pic), though not sure have ever seen actual cat do this, is somewhat beneath them. 2nd cat pic shows Naomi running after ball. Note cat and ball shadows (other shadows are from the windows).

So that was the day in SL. 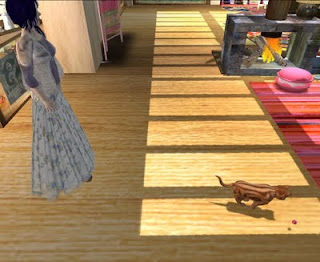 Will not list all dull jobs should have been doing instead of playing with virtual cats, creeping round lag-laden shopping precincts waiting for vendors to rez, and posing in new clothes on romantic sea shores. Would be just too, too tedious.
Posted by Sheila Yoshikawa at 18:37