The luck of the lost pig 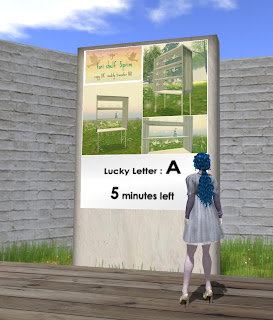 Spent 2 hours a couple of weeks ago waiting for letter "S" to come up on this Lucky Board in the Aju shop. During that time "D" came up four times. Know this since actually got Dimitrova to hang round (so wouldn't be troubled by friends expecting me to do something more constructive than lurk round a lucky board waiting to snag a cute item of virtual furniture). Eventually "S" did come up and was able to clutch item to Inventory and later position it in yet another new house (see here). However of course when teleported into Aju yesterday, "S" came up straightaway. Why does that happen? Must be a Law of The Lucky Board.

On another note, when clearing up after the Inf6011 class last week I found this escaped pig outside the Educational Informatics village. It had been there for a year, floating in space, the result of some mismanaged piece of Editing or perhaps just of someone who had decided to Abandon Pig in mid flight. 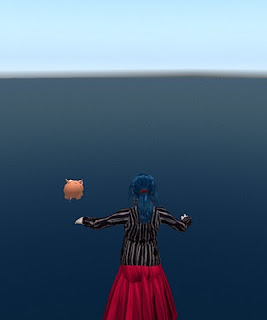 Anyway, it was swiftly Returned to its owner's Lost and Found.

Of course, could make up some elaborate story about pig making bid for freedom and an eternal flight over Infolit iSchools mossy hills.

But, after all, it is just prims. And, to be frank, not very ornamental prims either.