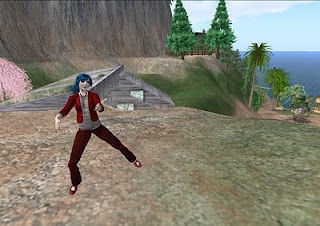 Sessions moderated: 4 (good); Percentage of speakers appearing on time to give talks: 100 (v. good); No. of pics taken during moderating: 5 (bad)
Calmed self before conference through use of tai chi (see first pic) and it had desired result since rather enjoyed moderating duties in end. Only down side was that since taking pics seemed to trigger crash computer out of SL, did not dare take any until last of 4 sessions, when had minor supporting role.
This was session about "veteran dialogues": ex soldiers in USA using SL to talk about their experiences. Jenaia was really chairing session and I was sort of backup link person. Therefore risked taking pics at that point, and duly crashed. This showed had been sensible not to try previously, but was pity since in particular session from Globalkids Bixby had been very photogenic (involved Globalkids dressed in bee costume raising teen grid avatar from coffin). 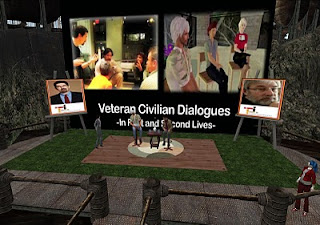 Earlier in day had encouraged own students into SL and know that majority attended at least one session, after some fiddling around with headphones and audio settings. Saw various other people, including Dousa who was involved in recording some of the conference, and had some nice chitchat with Loreena.
Am wondering whether crashing thing could be avoided by some sort of computer upgrade. However, would have to be inexpensive computer upgrade, what with funding cuts to Higher Ed etc.

Attended some of a session about recording stuff, and learnt about new screenr-type app, which immediately used to record part of the session on recording stuff. Am not sure can remember what it was called exactly - screencastomatic? - something like that. Feature was that you had the opp to upload, download, whatever, and then clicked "done" and it was gone. Main disadvantage over screenr (apart from it not staying online) was that it seemed to have a rather small area for the recording screen. 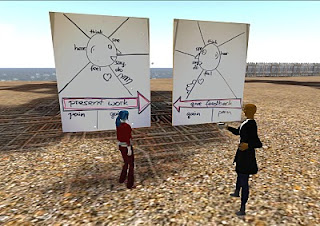 After this went to session on focus groups. Quickly emerged that I WAS the session on focus groups, since only other person was presenter. He had filled in time by putting words expressing pain in having noone turn up to your session on innovative interactive board. Had interesting conversation: at least I thought it was interesting. Only thought afterwards that perhaps should have asked for a copy of innovative board as prize for being only person there.
Finished day, heady with earlier moderating success, by volunteering to moderate more sessions tomorrow. May regret this.
Posted by Sheila Yoshikawa at 18:34