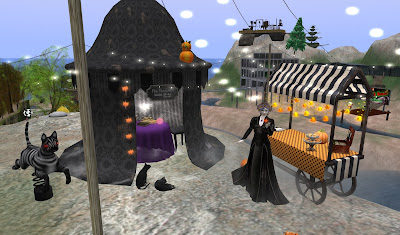 'Tis the time when SL gets buried in sea of pumpkins, witch brooms, fiendish masks, burning barrels, candles, skulls, omnious crows etc. etc. Whilst is lot of orange and black around, this year seems to have more than usual amount of monochrome/pastel/cubist/abstract Halloween knick knacks as designers strive to stand out from crowd of standard orange pumpkin with scary face / skeleton hand holding dribbly wax candle / starey skull with plants in.

Thus purchases this year include cute pastel colour-change kitty pumpkins, cute kitty covered in halloween blanket that roams round floor (just not seen in above pic.), and arty black and white pumpkin arrangement with glass jar. Am pictured with Halloween items old and new including v. good value tent that fits cat cafe theme unervingly well ("Paw readings"). For only 29 Linden yesterday (yes **29 Linden**)  you got tent, sign, witchy table, witchy papers and glitter effect, cat waiting to have paw read, chair with pose to look like paw reader and even 2 cats queuing outside (thank you, Chez Moi, did you make a mistake with the pricing?). With usual overload policy have added 2 assorted crystal balls on table, a giant sparkley spider web, string of "pumpkin kitty" lights, vintage pumpkin cat on roof and creeping fog effect. Can also see in pic above: rideable devil cat, new Halloween cart, working tarot reading set, creepy phonograph and 2 edibles: some kind of sushi and a pumpkin sweetie giver. 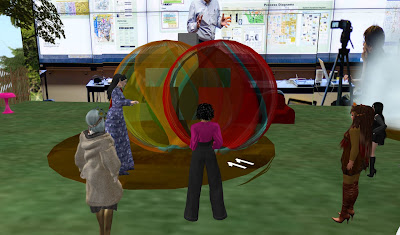 However, life is about more than pumpkins in the shape of cats, so on  Sunday attended one of Marly's Climate Change sessions. Several people created builds that expressed a position on climate change, and then we all had to imagine the arguments for that position esp. if it wasn't our own. Can see here pretty build which was expressing view that there will be no progress unless human consciousness changes. Fat chance with that one probably, but suppose one should be optimistic. Realised that am complacent sort who feels have done bit by not having washing machine or car on physical life (yes, really, not either of them, ever) but fails to sort rubbish into recycling types, most of the time, uses planes and buys too many objects. On the one hand all those pumpkins, tents and carts (as mentioned above) will take up zero landfill space when delete them, on other hand am consuming electricity as if it came from magic fairy electricity fountain rather than evil consumption of coal, gas, or nuclear thingies.

Moving on (since do not actually intend to stop consuming electricity) have discovered that have unexpectedly successful Youtube video. Had thought that the pinnacle of my Youtube fame was video on Abstracting which has clocked up 1,804 views. By the end of this video you will be able to explain difference between indicative, informative and structured abstracts and distinguish between an abstract and an introduction. Pretty thrilling stuff.
However, when uploading another video (on how to use a known academic paper to find yet more academic papers; such is my life), came across video from 6 years ago explaining how to create an avatar to enter SL. Was about simply to delete it, as is outdated, when noticed no. of views i.e. 11k and that had even got 16 comments which is more comments  than in all my other videos put together.

Comment which immediately springs out is of course "Ugh this girl voice..." which assume is not compliment. Since have always thought of voice as strong point (it hasn't got plump, wrinkled or wobbly, for example, so has advantage over some other bits of physical me) feel rather offended.

Get over it, dude, that's my voice and I like it.
Posted by Sheila Yoshikawa at 16:44