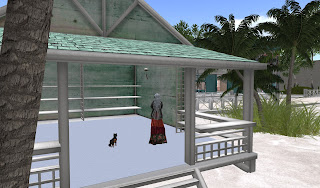 During past month got v.v. excited by advent of prim bonus as Linden Labs upped the quota for mainland by a heady 7,250 prims per region, and 5,000 prims per region for islands. Is so many prims that actually haven't used them all up yet, though with Infolit there is reason for this, since extra prims for non-mainland regions have only just been released today. Unfortunately (or should perhaps be FORTUNATELY) have not had spare time to decorate out full prim allowance on Noyo so will have plenty of space for Xmas trees, Xmas baubles, Xmas signs, Xmas gifts, skating rinks, animated penguins, hot chocolate givers and so forth. 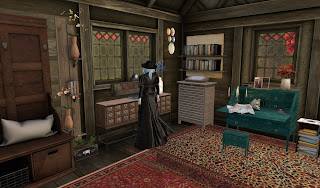 Will have extra place to decorate since had fallen in love with v. cute cottage on Winterfell, a 512 type plot with cottage already in place. Costs 300L a week which is exactly what have been paying for shop in Juicy for more years than care to remember (ok appears to be 8 years OMG, am not even going to try and add up how much that means have given to well-deserving Juicy sim landlord). Juicy shop was vanity project creating zero income from word go and has latterly been Cat Cafe with no pretence at money making. Was suddenly right moment to leave Juicy so packed up everything and in the first pic you have me and Hestia saying farewell.

In 2nd pic see new Winterfell cottage. It is book lined retreat, though now I look at 2nd pic have actually replaced that map cabinet and set of shelves with classy antique 4 prim dresser. However, still a lot of books on other side of cottage that you can't see. 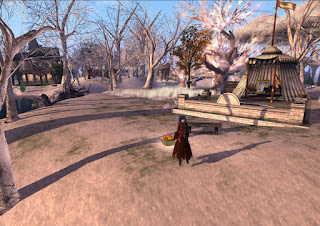 In fact is not first time have rented Winterfell land. 3rd pic shows rather larger plot that rented for short time in 2011. Apart from fact that current Winterfell home is good deal cheaper to rent, is also nice to have something with novely of restricted size plus close neighbours who are guaranteed not to put up banlines, set up a casino or fill plot with giant revolving polar bears. (Was really thinking of other giant revolving things beginning with p, but don't wish to get flagged by Blogger for unseemly content, which seems to happen at drop of mildly challenging word.) 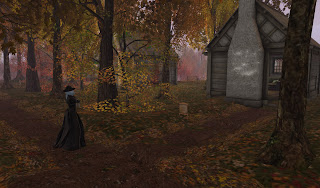 4th pic gives idea of what is like outside cottage, this is neighbour's house and my identical one is to left. There is sim policy which means outside should be decorated with things that might have been around in Victorian times, though at Halloween I think people were not observing this strictly since as far as I know Halloween  in Victorian England did not feature tableaux of animated zombies and self-stirring cauldrons, which is what my neighbour opposite put out (BUT STILL BETTER THAN GIANT FLYING Ps).

Meanwhile, back on VWER, the gravestones, poisoned apples and so forth have magically disappeared. Have erected small chapel, since, you know, Christmas is coming, and have hidden favourite tombstone-monument thing behind that. Could also not bear to part with witch broom generator, on which educators had jolly fun at end of Halloween VWER meeting. (see last pic) 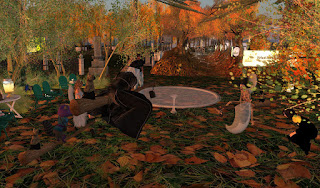 Still will be very surprised if isn't a Santa sleigh generator or Rudolph Red Nose generator to replace witch broom in due course.

Am rolling up virtual sleeves to cover all available surfaces with Christmas cheer. And people had better enjoy it.
Posted by Sheila Yoshikawa at 14:01