ZOMG I am so cute (again) 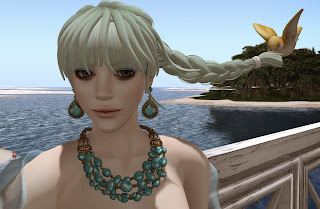 So here is version 1 of the hair with bird. Also bought another version which haven't worn yet. 1st pic. shows close-up of cuteness (bird flutters wings! and tweets! you can change its colour to match your dress!) and 2nd pic shows self in giant arena of cuteness, namely the Dreamer event. May be able to see that cute bird has been joined on other side of head by indeterminate cute winged blobby thing that bobs up and down.

Main purchase at dreamer event was sort of house consisting entirely of clouds. This is so overloaded with cuteness that probably enters some kind of new kawaii dimension where everyone is wearing backpacks in the form of Hello Kitty, with bunny rabbits on their heads, riding bicycles suspended from balloons, and surrounded by miniature cartoon animals emitting soap bubbles and butterflies. 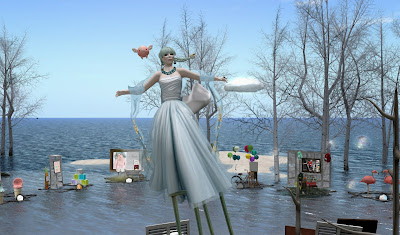 In fact sad fact is could probably assemble something like that from depths of giant inventory, except think Hello Kitty item is lunch box rather than backpack.

Meanwhile, changed out of bird princess gear in order to moderate a VWER meeting, v. serious business of new group starting up with aim of liaising with Lindens. What (I hear you ask) is position of VWER in relation to new body which has acronym which also has V in it (and some other letters, but can't remember which ones)?  Exactly question chewed over for 40 mins, then finished by discussing Our Value to The Lindens (which is, or course, priceless i.e. v. difficult to calculate). 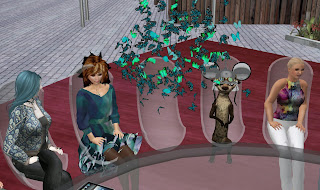 Was mostly concentrating on being good facilitator but distracted by Pathfinder's interesting avi namely (i) sunflower and (2) cloud of butterflies. In this pic appear to be staring mesmerised at swirling insects.

Finished evening by changing back into princess garb to visit kimono-ichi which had completely forgotten about because of number of cute events that had intervened, but was reminded by reading own blog entry from last week. Once again spurned octopus yukata, and instead invested in wedgewood blue yukata from 1mm (see middle kimono, below), plus assorted hair ornaments, bags and fans, and snagged 3 free kimono from different lucky boards, plus one free event gift kimono. 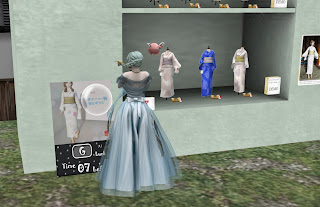 Am shown here at 1mm booth admiring pic of v. tasteful lucky board kimono had just won, letter has now turned to G. Giddy with freebie success am tempted to send in Zoe and Dimitrova to try their kimono-ichi luck. Given am due to be discussing weighty issues of RL module redesign with 2 colleagues in approx 9 hrs time would be madness, but ZOMG those kimono are so CUTE.

Posted by Sheila Yoshikawa at 17:32