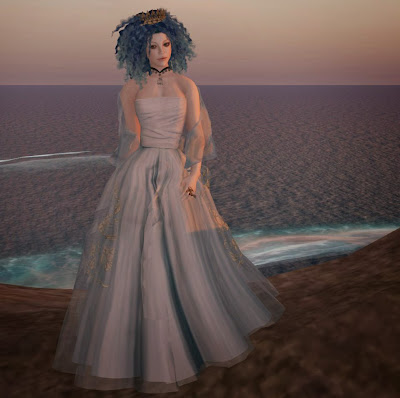 New "practice" project makes blogging into work so am feeling not at all guilty that am recording various acts of SL consumption instead of
- finishing peer review of article that is now mega urgent
- writing article about rhetorics of play in SL
- putting finishing touches to ppt for talk next week
- emailing students to arrange meetings
etc. etc. etc. and those are just some of the more attractive alternatives. However yesterday was a VWER meeting so is obviously v. important that capture Thoughts and Feeling re that, foremost of which is that spent some time perfecting princess outfit before attending. Hair Fair just started and had already:
- looked at set of hair fair pictures on Seraphimsl
- scrutinised pics on fave blogs such as Chic's
- sent Dimitrova in to browse a few shops and pick up freebies.
Therefore when finally managed to get into sim targeted xPlosion where picked up hair which has lightening streaks running through it. They flash and flicker! as you wear the hair! So who can resist, frankly, plus a percentage of the dosh goes to the charity Wigs for Kids, so is practically duty to spend money. Also acquired v. pretty updo from Ink (they didn't do it in blue, but you can tint it), and this frizzy hair from Analog Dog. This has v. nice HUD where you can tint the highlights, v. cool. Crowns were freebie in ISON store, gold, silver and iron. 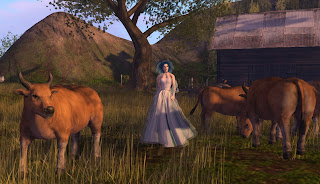 Dress was got at the latest round of Kustom9, and is by Junbug. Junbug specialises in satiny long dresses but thought this especially pretty example of her art. Then chiffon shawl was something had in mind to buy for a while, and it so goes with the dress so popped to Lika Ruby store to get it. Main issue was - what colour, but decided to match dress rather than contrast.

So as can see, spent long time preparing for VWER meeting but not exactly in terms of deeply considering topic for discussion that week i.e. virtual worlds and digital health. Nevertheless may be useful to identify Information Practice in acquiring stunning outfit. 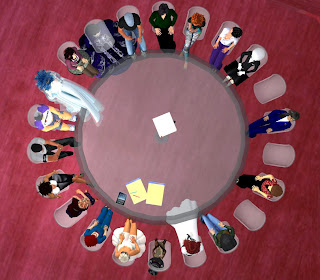 First thing is Monitoring i.e. keep lookout for shopping events coming up. In fact difficult to miss Hair Fair if you are looking at the feeds i.e. in my case Iheartsl blog aggregator feed, as increasingly filled with bloggers teasing with upcoming hairstyles to be released at Hair Fair. Then look at Chic Aeon's blog and the Itsonlyfashion blog more or less every day and they always get previews plus Cajsa on Itsonlyfashion always plugs charitable events like this. She is even doing little slideshows of her fave styles. So then is only matter of waiting for event to OPEN and for industrious bloggers of SeraphimSL to put up a gallery of special releases.So is worth noting that this is all to do with SL fashionistas sharing pics, comments and links about SL fashion.

When eventually went in, searched for Hair Fair in SL search and then kept trying to TP until finally managed it (as sims were v.v. full couldn't get in first try, always the same with popular events: in fact made no attempt to get in til event had been on a few days as knew would be hopeless). Once arrive everything takes ages to rez, matter of greyish blobs slowly emerged and turning into whatever it is they are) so usually just leave self floating and go off and do something else (not in SL) until enough has rezzed to know where you're going. Simples. 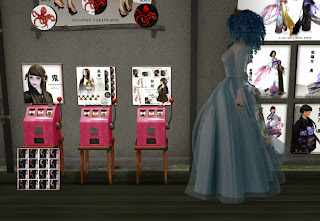 After this suppose is matter of knowing how to:
1) Establish whether hair available in blue (as otherwise pointless going further)
2) Buy demo hair
3) Wear demo hair
4) Buy proper hair, if demo proves hair worth buying.

Have already said which 3 hairs bought, still need to go back to buy Hair with Birds see e.g. here ZOMG it is so cute etc. As regards shawl had seen it when doing some window shopping months ago, Lika Ruby doesn't bring stuff out v. often but is usually good stuff when does. So was a matter of searching for shop and TPing in.

Anyway when got to VWER at least one person noticed fab outfit as Beth said /me curtseys to Queen Sheila and jested in reply that was practising my princess skills. Anyway must say that during meeting was taking even more pics than usual as ZOMG I Look So Cute. Mind you there were others looking cute as well inc. one person as large green object, not exactly sure what. Apart from this, might be invidious to pick out faves.

Today was tempted to go into SL because saw a notice which one of my SL groups had sent out (redirected to email), viz:

Kimonoichi started!
I made octopus yukatas, so plz get notecard for more info! 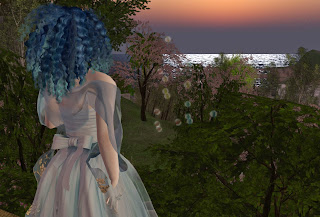 Octopus yukatas! Who can resist. So went inworld, got attached notecard and TPed into event. SL is all about Learning New Cultures and Kimonoichi seems to mean Kimono Festival, anyway they happen in Winter and Summer and event was certainly packed with stalls selling kimono. Again took ages for things to rez, but when did, stumbled onto Naminoke stand. Did in end resist temptation of yukata (light summer kimono) with picture of octopus on but invested 35 Linden (a snip) in gatcha to get hand-held windmill that emits bubbles. Got supercute rare one with transparent sweeps. Therefore remainder of time in SL spent taking pics of self holding windmill in arty poses. One shown is so arty you can't actually see windmill, just bubbles.

So, not much reflection on role of VWs in digital health, but giant win as regards cuteness.

Note re pics: 1st is me posing moodily on picturesque sim; 2nd is pic of me posing in same sim, was aiming for look you get in some fashion shoots where model is placed in unlikely environment with picturesque or indigenous set of animals/people and assume are meant to think gosh how cool/edgey/on-trend/ethically-sound/cosmopolitan is THIS brand, must rush out and get the look NOW; 3rd is overhead view of VWER meeting, note my skirt is so poufy it eats the table; 4th is Naminoke's booth at kimonoichi, middle gacha is the windmill one; 5th is arty bubble shot

Posted by Sheila Yoshikawa at 07:58