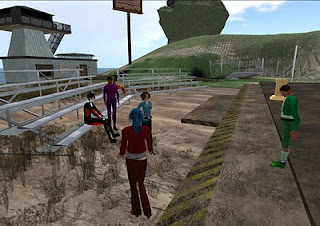 Wrote this post a week ago and then forgot to post. Is about Virtual Worlds conference which is History now, but am loathe to waste some writing. Also reading through realise it sounds as though conference was bit disasterous whereas (will hasten to add) was mostly fine and even good. Really it was.
Anyway.

Somewhat belatedly, am continuing tale of moderating at the Virtual Worlds conference. Was, as they say, one of Pride Before Fall. Had felt rather pleased with moderation at Friday's events, and rashly agreed to do 4 more sessions next day. However, failed on 3 counts, namely:
1) Did not manage to find out SL name of first speaker on day before;
2) Did not check that knew how to get to first venue;
3) Did not allow enough time on day to establish 1) and 2). 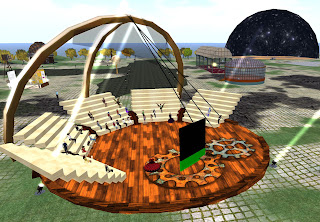 Thus found self at point when was supposed to be starting session lacking both speaker and venue. Did have tiny bit of excuse in that would have been v. helpful to have been given SL name of speaker rather than first life one (since various googlings turned up a blank), and also would have helped if landmark for venue had actually landed one IN said venue rather than considerable distance away.

However, was generally mortifying. Encountered one equally baffled punter at the teleport point, and said would contact him if found speaker/venue. Then TPed to anywhere in area that had green dots (since dots mean People). When eventually found my session, was already 10 past the hour (and person had offered to help was already in audience, so doubly embarrassing).

Apologised profusely to speaker afterwards (1st pic) and did manage to help 2 people in audience with sound and general info. Anyway, after this things could only look up, and connected with other 3 speakers in good time. Last of my sessions, on Open Wonderland, really moderated itself, since was team of people who were fielding questions in text chat. 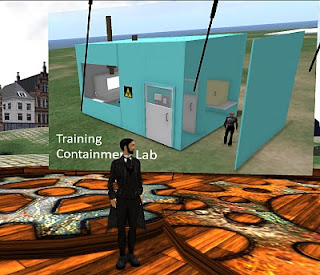 In between had attended keynote of colleague Jackie, which thought was v. good. Afterwards went to last few sessions, including Zana talking about Conne River project (2nd pic) and Graham talking about Opensim (3rd pic). Also v. good. Pleased to see Kattan in audience. After that she visited cat and took picture 2 posts ago.

Had look round exhibition, well in fact was mostly amusing excursion round exhibition since discovered flying thing on Virtual Pioneers stand, and spent most of my time zooming round it in this, rather than contemplating pedagogic virtues of exhibits. Here is a celebratory animoto about VWBPE that I did.

Posted by Sheila Yoshikawa at 01:42