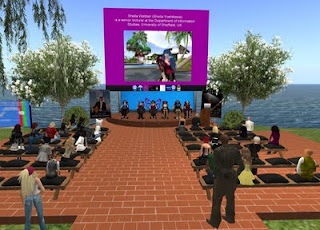 Presentations made: 1 (wonderful); No. of natural breaks taken: 1 (convenient); No. of problems with voice: zero (good); No. of times buried unexpectedly in chair: 1 (bad)
Have given 10 minute presentation, possibly taking 12 minutes, but at any rate kept roughly to time. Here you see me seated on the podium with other panellists, with my introductory slide.
Had newbie moment when tried to sit in chair on podium and suddenly found self sort of embedded up side down. Even in SL is slightly embarrassing when done in front of audience. Knowclue (the one with wings) had similar moment, which led me to recall time in July 2007 when we were both newbies and met in Abo Akademi. I was wearing a garish assortment of garments and Knowclue had trouble unbending her knees. Happy days. I found the pic of this and sent it to her afterwards. 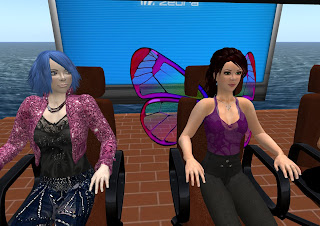 Back to 2009. In fact didn't use powerpoint, just had notecard which inevitably spent 3 times as long preparing as thought I would. Used voice, and although had had no time to test, it worked ok. Was talking about Innovative Media Literacy. Suppose should put notecard up somewhere and link to it, so (pause while copy it into textpad and save on server) here it is. Had good response though mostly people DO say nice things after SL presentations, whatever, so sometimes difficult to tell whether actually did go down well. Other speakers were Alexandria Knight, Larry Klugman, Celestia, and Knowclue Kidd, plus Valibrarian Gregg who was chairing.
Knowclue showed some nice films done by her students http://knowclue.wikispaces.com/Innovation, only drawback was that, whilst watching films, suddenly was unable to type in any kind of chat or IM, and list of Friends disappeared. Decided would be too rude to relog whilst still on podium, so waited to later, and was just grateful that no-one asked me direct question. Turned out afterwards that several people had the same thing, somthing to do with the media texture. 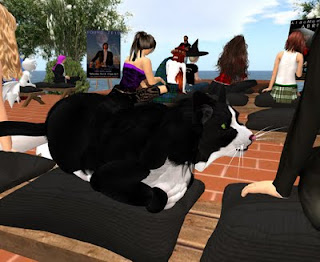 Is obviously one of problems in SL that have these glitches which cause one to need to log on and off. However earlier had enjoyed benefits, when decided that would like to answer Call of Nature before was due to speak, and could remain on podium in SL strapped to chair (at least, that's what the animation looks like) whilst flitting off to the Conveniences in RL.
Stayed on for next session, talk by Krull Quarr (who has v. nice whiskers, here is pic of him earlier, listening to concert), but not for later musical entertainment which promised "amusing modern songs about real life." Who needs amusing real life when can listen to a cat talking about scripting?
Posted by Sheila Yoshikawa at 16:04