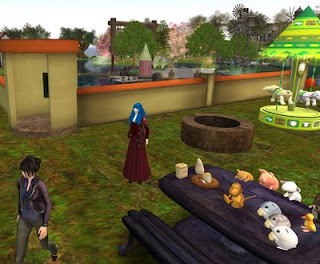 Research launches attended: 1 (invigorating); Flying pigs rezzed: 1 (joyful); No. of flying pigs set with Poop On: 1 (amusing)
In RL attended today launch of Digital World initiative in which researchers in all reaches of university are exhorted to work in purposeful harmony to bag huge wodges of dosh for research that is, in some way, however tangential, about The Digital World. As far as can see are not v. lucrative new opportunities for dosh, but idea is that by working together can grab more of what is already on offer from research councils, EU etc.
Anyway, most memorable part was when assembled company was exhorted not to submit crap research bids, since said crapness would soil fair name of uni and make it likely that any future bids from other parts of uni would be lightly tossed aside simply from have originated from same institution. Obviously everyone v. sobered by this awful prospect, though must say that was seized by sudden urge to go home and write crap bid just to be awkward. Burning question remains though: exactly what IS a crap research bid? e.g. is it worse if the proposed research is crap, or if the proposal itself is?
On further thought, realised that could propose whole research programme stimulated by this theme, e.g.
1. Phenomenographic investigation into variations of conceptions of “crap research” at a Russell group University **
2. An action research project with starting problem “I want my research proposals to be less crap”, with at least two iterations of the action research cycle and employment of a panel of embittered old dons as critical friends
3. An auto-ethnographic investigation conducted by someone who has a well-documented trail of evidence showing that s/e always submits crap research proposals; leading to playfully transgressive accounts of lived experience of not getting research grants.
4. A case study of an academic department which is reknowned for its crap research bids, using Eisenhardt’s process of theory building to develop a model of crap research bid production;
5. A Delphi study to gain an expert consensus on the future character and prospects of crap research;
6. An investigation into factors determining crapness in research proposals, using a grounded theory approach;
6. A poll on Facebook of which researcher you would most like to throw crap at.
Hmm, that last one is a bit nasty, but if Facebook then would only be virtual crap. 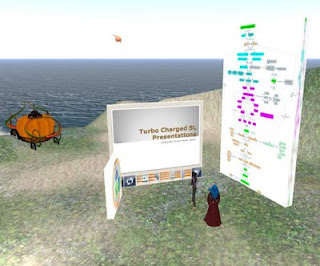 Anyway, might well ask what connection this have SL. One answer is that any of the above might become Virtual World Research candidates were the words “in SL” inserted somewhere within them. Other is that, although have been doing digital stuff for aeons, SL has made RL alt more likely to troll along to events such as these.
Day was not without SL activity, in that after zipping from said research meeting to some teaching, zipped back to help Bluewave who was introducing SL to a roomful of people in Texas. Bluewave has been v.v. successful in getting money to purchase dozens of regions, and is also v. helpful person generally. Have pics of this but on my other computer, so may add one later.
Afterwards spared a few minutes to fiddle around with latest animal purchase, namely flying pig.
Was in v. cute shop on Wednesday (see first pic) when Pancha IMed re. the posters that we are putting together for Alejandro’s Spanish-language discussion in Infolit week. As well as flying pigs, are also flying moles, moles that pop out of ground, lamb and pig merry-go-rounds (they wiggle their legs! they are so cute!) and much more. Tped Pancha to admire same and also have more serious discussion, and could not resist buying pig before leaving for Infolit. 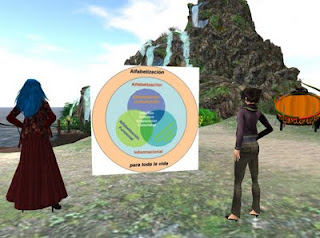 Pigs are copy, and can set height, range o flight, and set chirp and poop (splats descend from sky) on and off. They take off v. gracefully, and are good size for those occasions when some animal interest is in order but you don’t want people being knocked over all the time. Also could be useful if you have to implement decision of Facebook poll, though might need to rez whole flock to get sufficient splat coverage.
Unfortunately haven't yet taken close-up pig pic., but looks like pig in 1st pic, but with wings. Is speck above me and Pancha in 2nd pic., happily chirping and pooping. 3rd pic shows Pancha and me contemplating her information literacy poster with multiple embedded notecards. Alfabatizacion Informacional para toda la vida. Indeed.
** [note to Australians: this is like “sandstone”; note to Americans: this is not quite as good as Ivy League]
Posted by Sheila Yoshikawa at 12:34

I am very grateful to you for this wonderful summary of the meeting. I obviously did not need to take notes at all (or watch video after) in order to remember all important points. Everything is here.
Thank you Yoshikawa.