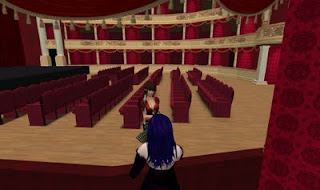 ZOMG moments: 1 (embarrassing, but sort of cool); OMG moments: 1 (v. bad); No. of La Rinascente bags collected: 7 (bad); No of free autumn leaf blowers discovered: 1 (good)
Am back from Milan now, but am recalling a ZOMG lol moment from RL. Was a special concert (for harp and stradavarius violin) put on for the conference in Milan Cathedral. As cathedral is v.v.v. big, are 2 giant video screens either side of nave so audience can actually see what is going on at the front. Was swaying along in trance like state to one of the pieces when in corner of eye caught sight of own face magnified to horrible effect on screens. Perhaps was only person in audience that seemed to be enjoying things. At any rate was rather offputting, and found myself thinking "If this was SL, would be saying ZOMG lol at this point" So, now I have.
Also had special conference event in La Scala opera house in RL and celebrated that by doing fashion shoot in the SL La Scala replica. Whilst was doing this, Heyjude asked me to test out her voice audability, and 1st pic shows that. She was going to meet Claudia Linden, posh, forgot to ask her why. 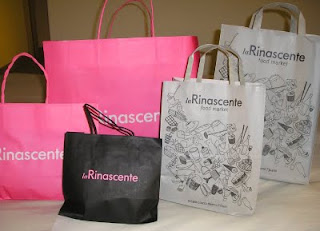 Otherwise, Milano set me pondering about RL vs. SL shopping. Am displaying in 2nd pic evidence that can shop in RL. Appear to have had subconcious urge to collect every size and style of bag available in La Rinascente. La Rinascente is similar to Liberty's in London, in that after about 10 mins everything under 100 Euros seems incredibly cheap, which is how ended up with dinky packet of pasta costing 4 Euros and chocolates costing a mere, ahem, 20.
One RL/SL difference is that in RL, esp. as was Milan, decided to wear most elegant garb for swanning round and looking at RL frocks. Similarly, when went to opera could adorn self with jewels, shoes and shawls without worrying that fashion police would be checking my Avatar Rendering Count. In other words, in SL you (or I) (or other fashion bloggers) buy lots of stuff, mainly to dress up on own or with a few close friends, and take pics of self, but cannot wear full finery at kind of events (dances, concerts, fashion shows) where would dress up in RL, because it would add to the lag. At shoe/hair/skin/clothes fairs you are even encouraged to abandon your hair. 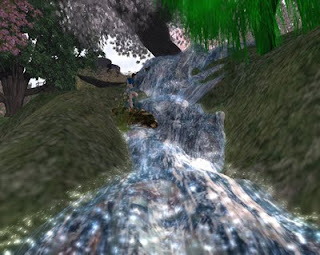 In contrast only fashion moments in RL were officials stopping women with bare arms from going into cathedral, and ordering them to put on MORE clothes.
Today's OMG moment was less pleasant in that something is evidently wrong with home PC, since after a shortish time screen went multicoloured and then blank, and when rebooted and feverishly started running virus checkers and diagnostic stuff, in mid-check screen just froze and blanked. Oh well, will persevere with checks.
On a happier note have bought some cute landscaping stuff. Got pack for most realistic and sparkly waterfall ever (from New Trails), though also, has to be said, the most laggy. Has four layers to each part, including particles and mist, and can put together combination of waterfall, water panel, water curve and water pillows to very pleasing effect. 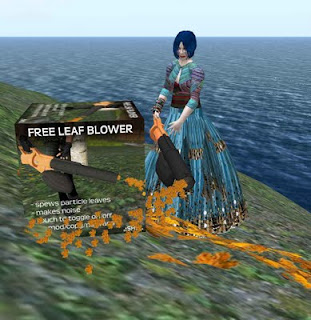 Also found new shop (called SHD) with tweeting 2 prim birds, stone dragon that hisses at you, nice autumn ground cover and very pretty Xmas lanterns, all at reasonable prices. Also there is a freebie instore, this leaf blower, and there are some freebie stone plants (little plants that look like stones, have seen them in RL In botanical gardens) hidden in an angel as part of - some hunt or other.
Posted by Sheila Yoshikawa at 08:12