Hunts; Walls; I Am My Cat 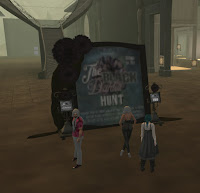 No. of hunt items found: 3 (good); No. of hours spent searching for hunt items: 1.5 (bad); Number of gigantic boundary walls bought: 1 (good); No. of kittycats whose bodies I have occupied: 1 (so far) (not spooky AT ALL)

With October comes halloween hunts and one of fave SL designers, namely DRD, has a hunt in their shop. You get a HUD, you go around spotting Black Dahlia flower heads and get cool stuff when you find them. This sounds v. simple, but have trawled lower floor of DRD's store twice, camming into corners and waiting impatiently for all to rez etc etc, plus have gone round upstairs twice, and done quicker trawl of builds in their garden. However have only found 3 items out of about a dozen. Was at least glad to hear from DRD group chat that wasn't just me that found this challenging. Hunt object is small and also black, and as DRD do a lot of dark stuff and store is huge have evidently missed loads of dahlias lurking in corners and under carpets. Also they produce a lot of small fiddly objects that look v. like dahlias until they rez properly. 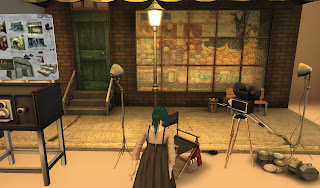 In 2nd pic you may be able to see object on floor that got overexcited about til saw was "film cans" not dahlia. Realise have got used to hunts where you (a) get a hint (b) have a large and flashy hunt object, so am probably lazy but frankly life is too short to spend more than 1.5 hrs looking for objects however cute.
Was, though, friendly experience, one avatar IMed me to ask if was on hunt and we exchanged cheerful remarks on lack of success in dahlia finding. Group chat also good natured except when spammer spammed chat with random request for 100 Linden which resulted in multiple insults and group bans for spammer. Would be careful about spamming DRD chat, probably contains people with arcane knowledge of spells and potions (AM JOKING know that people who like to recreate post-apocalyptic dungeons and spooky haunted asylums are quite likely frightfully well adjusted individuals who would no more think of cursing someone than of jumping the checkout queue in Tescos).
Anyway have ended up with (1) carpet (2) very cute tray of bedroom decor stuff (3) some sort of notice on a cute board PLUS there was a free thing just waiting to be nabbed on the 1st floor, vis several female corpses hung up on pegs, some of Bluebeard's wives according to the description. Obviously maker did not subscribe to the "it is all symbolic of mental abuse and Bluebeard's wives are now all enjoying fulfilled lives with more suitable partners, it's Bluebeard you should feel sorry for" line. It will be a useful item for my halloween decor this year. 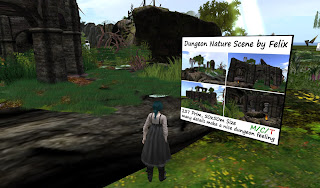 Thinking of Halloween made me think of dungeons and caves, so wandered over to the Felix Alter sim as he does v. good v. reasonably priced cave and mountain decor. Did look at caves (see pic), but got distracted by what is v. good idea and wonder why noone else has done it. He has created high thin and attractive cliff walls (with walkable paths) for people to put round sims when they want privacy from neighbours. One of perils of mainland is suddenly having some huge hideous barrier penning you into your plot, because your neighbour doesn't want to see your beautifully landscaped gardens but would rather see some giant, implausible and out of focus picture of a tropical beach.
There are several options which mix and match, all priced at 250 Linden, and bought one and immediately put it to good use. Trouble with previous similar things is that they have tended to be (a) not thin enough (b) not that much more attractive than the hideous beach picture. Will post some actual pics of walls at some point but cannot pause to do that as OMG final thing is MOST EXCITING. 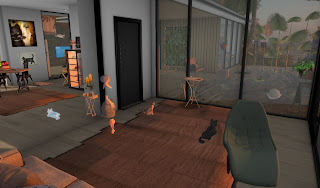 Namely, KittyCats have a new update and YOU CAN BECOME YOUR KITTYCAT. OMG.

In fact practically never desert my human form but took all of 10 secs to decide that I wanted to inhabit the bodies of my KittyCats. Took copy of body shape, made sure outfit was saved and then you just click on your chosen KittyCat, select something off the interaction menu, get a folder which includes a "KittyCat Transponder" you wear the folder and voila!

In fact it wasn't Voila! at first as simply became invisible. Wandered about a bit invisibly and then thought would try logging off and on and THEN trying the wear transponder thing again and this time it worked. I went through the spooky change thing (see pic, I am migrating, Jennifer is sitting all unconcerned to my right), Jennifer disappeared and then I WAS JENNIFER. I walked and ran and sat and flew. When you fly a skateboard appears underneath you. I may moderate VWER as a kitty on Thursday so went and practiced sitting at the VWER table (see last pic) and OMG I am so cute. 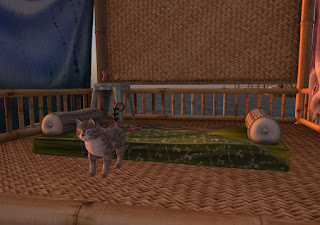 Was a slight worrying moment when I transponded back and initially the "Jennifer kittycat" in my inventory simply would not rez. However all was well when I logged out/ in and she now seems to be sleeping and pottering about quite happily again, all on her own.

Am deciding which Kittycat I will comandeer next. Probably Marl.

Is this a bit creepy? I don't care if it is a bit creepy. Thank you KittyCats creators for providing me with awesome features I never even knew I wanted. 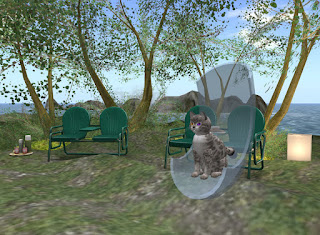 Posted by Sheila Yoshikawa at 08:54