The perils of ducks 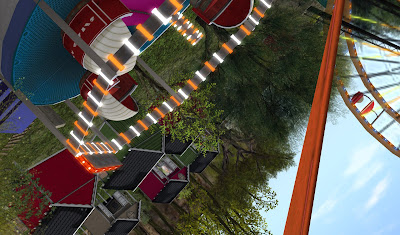 Had formulated idea that since already have oodles of unrezzed stuff in inventory should not acquire more, but, heyho, saw an ad for this duck bobbing game at the Wayward event, and off I went. Proved to be not the most enjoyable experience since the venue was incredibly laggy, a combo of lots of people (it's featured on the SL login page) and all the fairground rides.
Additionally, flying had been disabled.  Simply fail to understand why someone who wants people to stay at their events disables flying. Means you spend more time camming round, or chair-hopping, or hopelessly double clicking your mouse to try and go above a crawl. 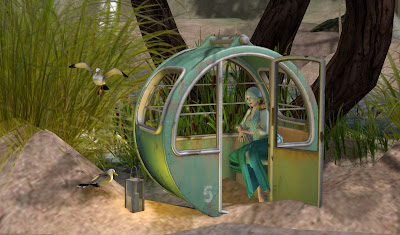 Anyway, despite this, persevered driven on by fantasy of bobbing for cute virtual ducks. Was not really intending to indulge in any other purchase but predictably ended up with
1 seat in form of old weathered ferris wheel carriage
1 air balloon
2 ducks which can sit on shoulder
1 elegant whicker lounge with gauzy canopy
1 pair free mesh eyes
Was there something else? Have vague feeling that may have thrown 50 Linden at some gacha or other. All these were encountered before coming across bobbing ducks. Painstakingly worked way round event, crashing every few booths. Think rot started when had crashed twice in Soy booth and in the end felt sort of emotional attachment to the Soy ferris wheel carriage that had been dithering over, and bought it. 2nd pic shows this in situ, has replaced equally cute truck/shower from MMG at end of garden. Hope you can see have tried to be a bit arty with this pic, with strategic seagulls and shadows enabled. 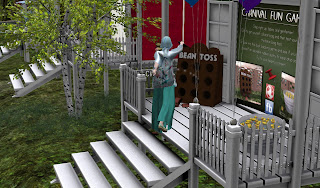 Crashing got worse and worse, until part of computer screen was obscured by sort of tangle of pastel coloured shapes, which think was own graphics card saying help help help. Therefore eventually rebooted and then wasn't quite so bad i.e. only crashed every 10 minutes rather than every 3. Was then able to appreciate that Wayward sim was actually v. nicely set out with all sorts of cute items to sit on/ride, including numerous carousels (teacups one, cat one, seahorse one etc. etc.) and other rides that zoom round and round or up and down. First one tried remained static, but enjoyed ride on The Vortex (see first pic taken as whizzing) although way pose worked meant that could only glimpse self squeezed between 2 seats, perhaps in fear. 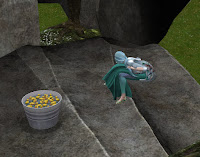 After having to go round event twice, found ducks. Vendor had also created beanbag game (see 3rd pic). You click on the item, you attach beanbag, you click on bean toss board, you toss it, end of story. Somehow felt ought to get a bit more for 250 Linden. Tried duck bobbing, and found that curiously, when posed by bobbing bucket, did not lean over bobbing bucket but rather hunched up several feet to one side. This gave a moment's pause (is this bugged?) but desire for cute ducks overcame common sense.

As can see from 4th pic, unfortunately the bug continued when got booty home and unpacked it ie when SAT on bucket, immediately moved to right and hunched. Am too apathetic to contact creator to say "It's bugged" so am hoping someone else will do this and will have corrected copy dropped on me at some point. This does generally happen, only the other day got a less buggy version of some complete outdoor bathing set that had of course forgotten had ever bought. 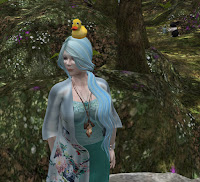 Upside is that after have bobbed for a while, get given a duck which attaches to head.

Can forgive people a lot for random freebie head duck
Posted by Sheila Yoshikawa at 15:27