It Began With A Japanese Lantern 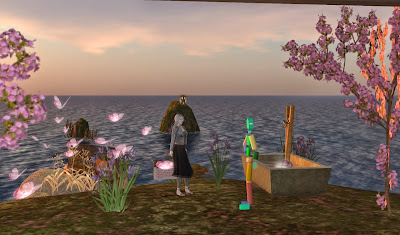 Today used Sakura House as discussion venue for first time in long while. Is still original 2007 build, and causes nostalgia and happy memories of days gone past e.g. time when student holding Jack Daniels bottle stumbled into infolit discussion and fell unconscious at our feet. Felt Pioneer Teacher credibility status went up several notches as real student doing something recreational in SL is always a desirable outcome for SL teachers.

Topic of discussion today was research approaches. Pancha talked about constructivist grounded theory, Ridvan about case study with ethnographic texture, and I talked about autoethnographic study of SL that have still not done even after several years of printing out articles about autoethnography and filing them away in boxes/on hard drive. Suppose actually reading articles might speed process, but in this case managed to produce paragraph for notecard by copying out a few sentences** found in a textbook on Google Books. Will probably now have to buy book and put it on shelf, as author appears to be guru in field. Can Reading Book be far behind (answer: yes)

For uninitiated, autoethnography is ethnography about self. Actually realise must have blogged about this before (do search of own blog). Yes, July 2010 http://adventuresofyoshikawa.blogspot.co.uk/2010/07/wasted-evening-or-pleasant-evening.html. Think have progressed since then as am sure are more articles in the Autoethnography article box now. 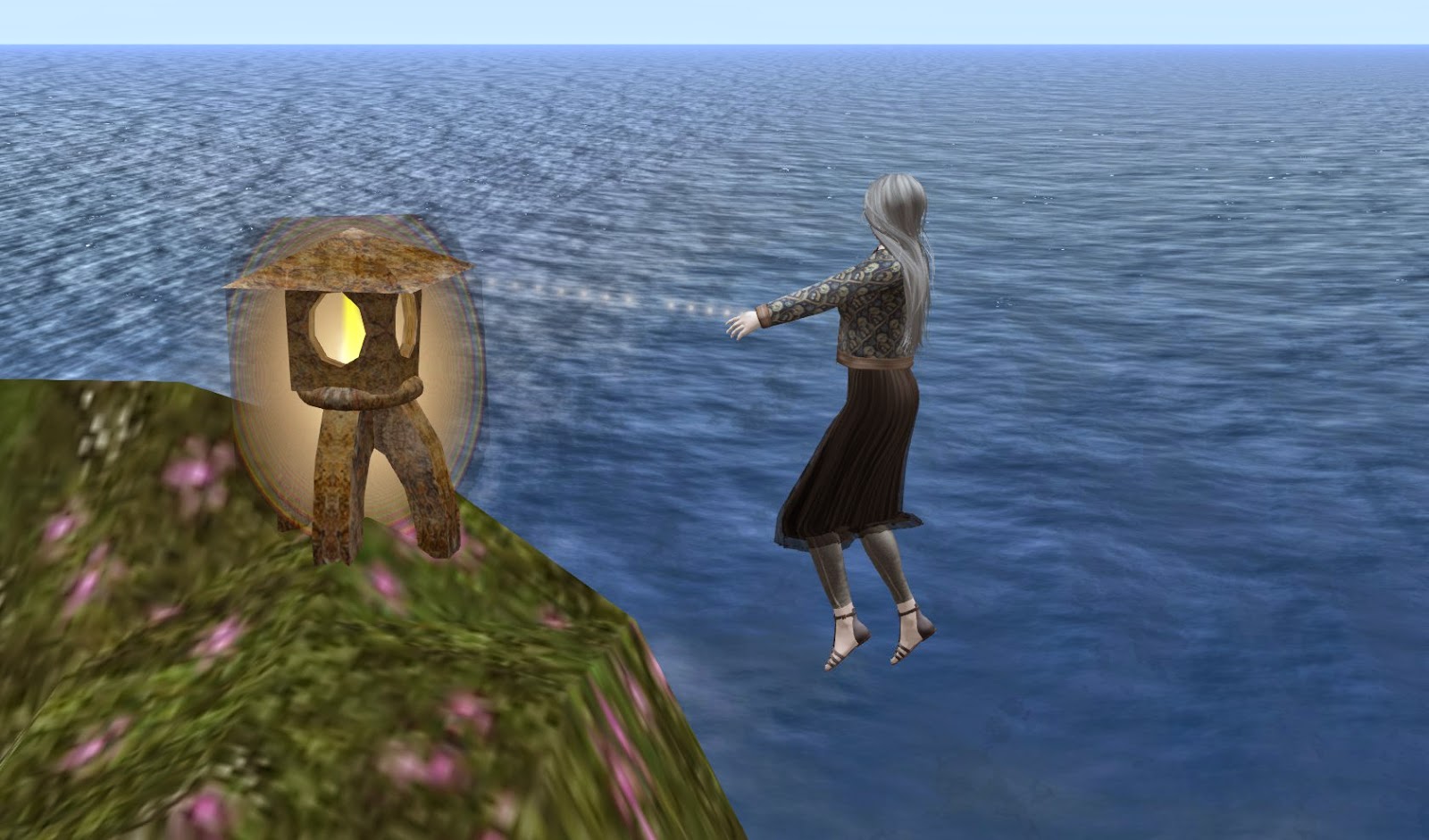 After meeting meandered outside Sakura house and reminisced about time when had just got island and put down a japanese lantern as the first object. Have recreated scene in pic, right.
Pancha observed
"the lantern is a good metaphorical object"
which actually hadn't thought of before and is Useful Insight for a budding autoethnographer. Was this lurking in back of mind when selected it as First Prims? Think that it was just that liked japanesey things and lantern was copiable. However, perhaps was more too it than that and didn't even realise!

In fact for purposes of autoethnography should reproduce chunk of text JUST NOW, fictionalise it and then reflect on it

**** [line censored as was indeed being immodest and comparing ability to write fiction favourably with someone v. famous in autoethnography world, who knows if said person might google own name and "autoethnography", too dreadful to contemplate] 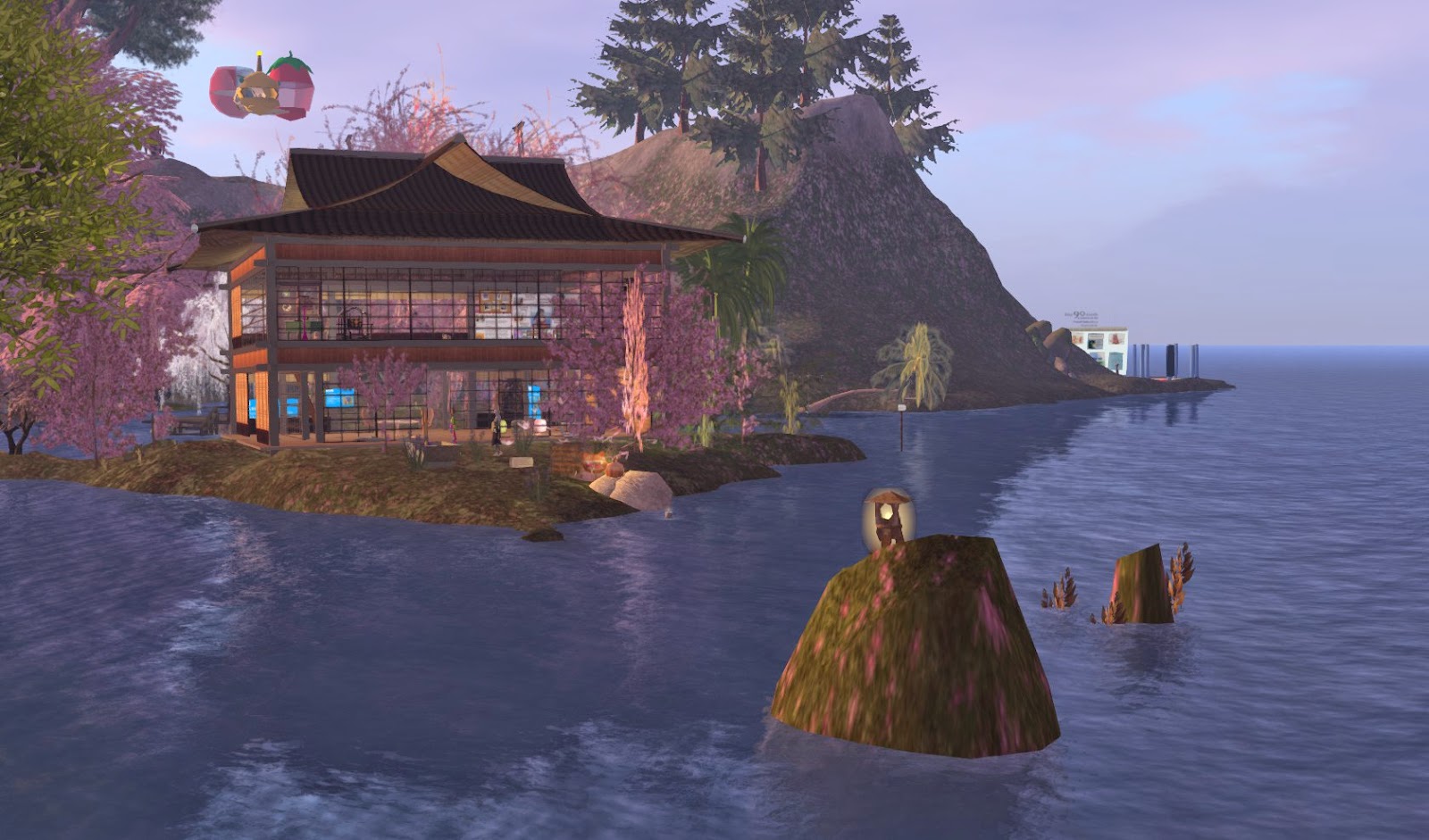 2. Fictionalised version
After the meeting I felt impelled to walk to the door and look our over the glimmering, shimmering sea to where the lone, stone lantern threw its light. I murmured, emotion catching my throat, "that was the first object I placed on this island". Ridvan and Pancha joined me. Together we contemplated the view. I recalled the wild exhilaration of seeing a new, virgin land blossoming beneath me, ready to be terraformed to my will. I smiled "Such and exciting experience". Ridvan jested lightly "So, your autoethnoethnographic journey starts here!" I nodded "yes, my systematic sociological introspection, as Ellis says". This time, this place, were good places to recreate my journey, to delve within and without. Pancha exclaimed "the lantern is a good metaphorical object". I smiled at her insight, observing "Indeed, for it shines light on the whole of my SL experience." As dusk fell, we recalled more happy times on Infolit iSchool. I felt invigorated, inspired.

3. Reflective account
Well can reflect that SL scenery evokes emotional response as would RL scenery and that also am nostalgic person with attachment to pixelated objects. Also that if am with another Immersed person with Shared Experiences can launch into reminiscence session as dull for 3rd party as is RL equivalent.

Ho hum not sure that is really deep reflection, but actually need to stop blogging and get home as tomorrow outside SL have got v.v. large amount of things to do and then off to RL Sweden where will be attending friend's PhD viva, which over there is public performance.

So, one more step on the autoethnographic highway!

**WITH DUE CITATION AND QUOTE MARKS, just to make that clear
Posted by Sheila Yoshikawa at 15:30