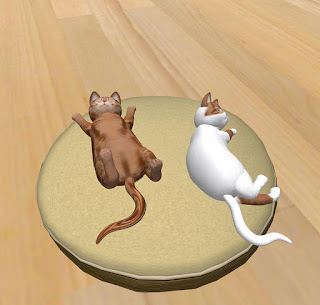 However was shocked when a message appeared in text chat telling me that "Quilt is way too old for breeding!" Not only does this seem like a super-truncated window of opportunity, but feel that language ("Way too old" indeed!) would score v. low in "diversity and age sensitivity" stakes. The poor thing is less than 200 days young!

Naomi is not much Quilt's junior, so turns out that both have descended into twilight years without me having given either of them the opportunity of fulfilling their destiny (i.e. making money for Kittycats by obliging me to buy more Kittycats food for all the new kittens).

Must be said that Naomi and Quilt do not seem overly bothered about this, indeed must have passed kittycat-menopause some weeks ago and thus had chance to reconcile themselves to their elder status. 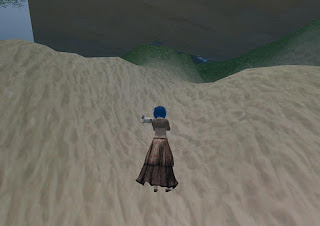 Meanwhile Stone took to disappearing under the floor of the CILR office (see last pic), so have had to go hunting for him on the sea bed more than once. Perhaps is sulking because of lack of young frisky female kittycats. Whilst ponder kittycat future have removed him to adorn another of my homes.
Posted by Sheila Yoshikawa at 17:30