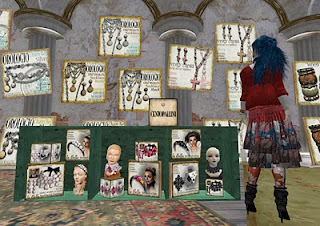 Since have not yet fixed proper laptop, one that started going clunk-clunk in April, am now rather restricted about access to SL when away from office. To begin with, new netbook allowed some access, although generally of slow grey lumpy kind. Still it meant could attend those kinds of educators meetings where all you do is find a seat and then throw in the odd bit of text chat to show you aren't just letting your avatar sit there while you go off and make coffee or check your facebook page.

Anyway, gaps mean that when do get back in have loads to catch up on. Cute items for Spruce Up Your Space or Super Bargain Saturday that might still be out and available! Paying rent for shop in Juicy! Feeding the cats! And of course have the weekly obligation of the 52 weeks of colour challenge, which now has ONLY SIX WEEKS LEFT, gosh what will I find to do with my time when that finishes.

Obviously a couple of things are - going on hunts and visiting fairs. Have tried to give up fairs as tend to be v. time consuming, somewhat laggy, and also inevitably feed shopaholic tendencies. However, when doing Brick Red outfit for current Week of Colour Challenge decided that hadn't got quite the right earrings, so a visit to the Jewelry Fair that just opened was the only logical solution. 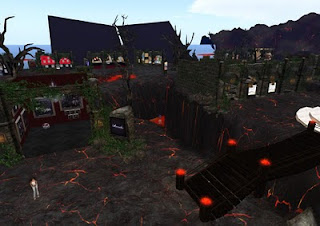 Results can be seen here and here. Found v. pretty peacock feather earrings, only prob being that if viewed from front they disappear into hair. Think this is something to with alpha textures. Anyway, easy solutions are to
a) wear updos so is no hair in immediate vicinity of lower ear and/or
b) take pictures from side, where feathers magically appear again.

Am accumulating vast store of lore of this sort. Not sure what will do with it all, but then probably don't apply most of stuff that have picked up outside SL either e.g. once restored and re-caned a chair but don't think have been once required to reapply this knowledge in intervening period. What find slightly puzzling is that researchers who have researched SL fashion scene have tended to pursue v.v. dull questions about identity inside and outside SL, yawn, rather than interesting stuff e.g. why you might prefer Truth hair to Lelutka hair (in my case answer is simple as Lelutka don't do blue hair). 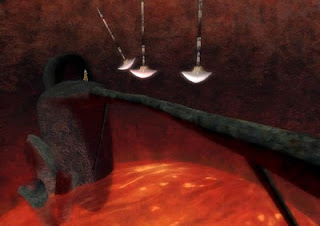 1st pic shows particularly tempting booth, and 2nd pic shows one of the Jewelry Fair sims ("Fire") Interesting that last year's organisers seemed agonisingly concerned about exhibits only using small number of different textures, no animated items, no particles, layout designed so that people's computers only had to absorb limited no. of graphics at a time, strict instructions about de-primming yourself before visiting etc. etc. This year all that has been jettisoned, as may see from rather murky pic, sim was filleed with animations and textures, and one often found oneself having to plough through a lava chasm to try and get to the next booth.

Talking of lava, the 3rd pic shows part of a short and enjoyable Quest that BareRose had, where you had 4 skyglobes with scenes in them that you had to navigate. In this one you had to go across narrow bridge with giant swinging axes, at risk of boiling to death in the lava. At the end you got some cool armour and a beautiful flying dragon. In final pic can see me swooping over Cowell on my dragon. Wheeeee. 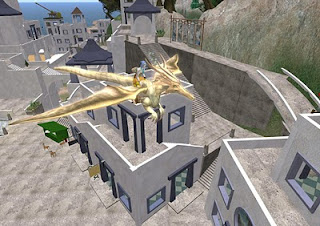 Posted by Sheila Yoshikawa at 13:22