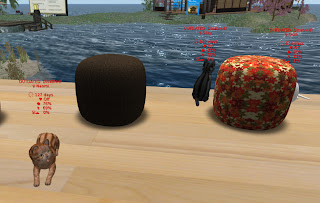 Was going to blog something completely different, but when happened to go into common room today, discovered poor Naomi immobile with her face to the wall, with the words "OUTDATED! Disabled!" over her head. Clicking her just resulted in her ID being chatted out. TOOK her and went to common room where, as I feared, both Silky and Qulit were similarly affected.
They all just lay or sat there, and would not communicate, move, play or cuddle. Most distressing.

I googled around and discovered that there had been an update a few weeks ago, which evidently I had missed. However, normally, it just says "update me" above their heads, and you can interact with a menu to get them updated. 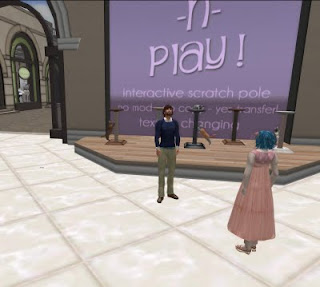 After some fruitless scanning of the Kittycats website forum, teleported to the Kittycats sim, where I discovered a customer support person, Straykitten, standing near the door by a display of kittycats scratching posts.

Only about 10 minutes later, I was delighted to have a new, Updated Naomi dropped on me by Kitten Longmeadow. I rezzed her next to the inert Naomi, so I could take a picture (you see the new Naomi on the right), and then moved Outdated Naomi quietly and with dignity into the Trash folder of my inventory. 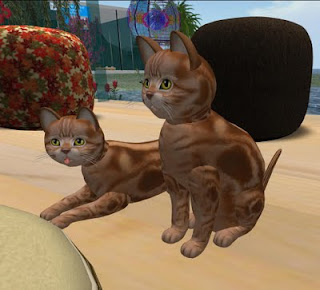 Apparently Quilt was no-transfer, so for reasons that I'm sure were very sound, some other avatar was going to have to drop Quilt to me. I took a couple of snaps of me and Naomi reunited (similar to the last pic here) and sent one to Kitten (lol).

The question remains of what to do with Silky, who belongs to Dimitrova. Dimitrova could go through the same process, but, at the moment, feel rather large amount of apathy.

Was quite upset about losing all kittycats, but somehow saving two kittycats almost seems like enough, especially considering the ongoing cost of kittycats food (85 Linden per month per cat). Hmm. In black and white that seems rather callous, and Silky is very cute. On the other hand, Silky could just sit quiet on a plinth for all SL eternity without costing another linden, which does have its up side. 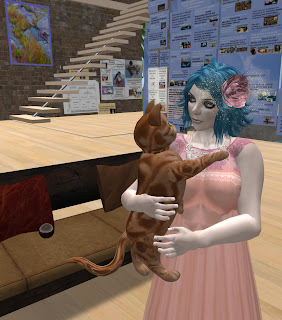 Posted by Sheila Yoshikawa at 12:09