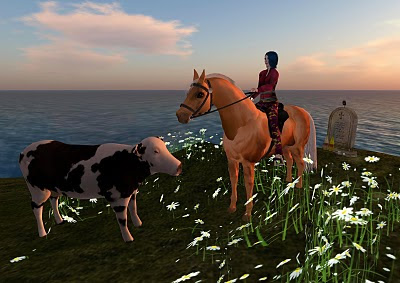 Relaxing horseback rides taken: 1 (v. good)
Have felt somewhat stressed out not to mention suffering from what appears to be yet another RL cold, so today decided to insert a little rest and relaxation by exercising a newish purchase, namely Golden Streak the palomino horse.
Had tried out an AKK horse demo before, and been v. impressed, but they are not cheap. However, when Pancha showed me the build she had created for the Vet School at her uni, was reminded about them.
First Dimitrova tried out a demo, and then I took plunge, fulfilling girlhood fantasy of owning a palomino (fantasy actually involved 2 palominos, one of which won Derby, and one the Grand National. At least had realised even as youngster that needed different type of horse for 2 events, but hadn't appreciated that racehorses have to be thoroughbreds and you don't get palomino thoroughbreds)
Anyway, after that quick bit of horse lore, cut to me investing the Lindens in a fine palomino animal with integral bridle and saddle. 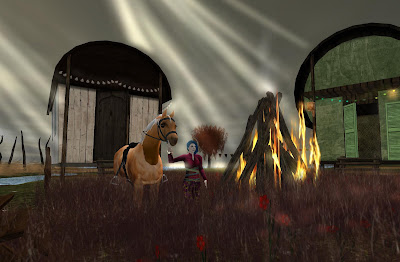 Its ears twitch!
It snorts!
It goes clippety clop!
It trots!
It gallops!
It jumps!
It flies!
You can dimount and lead it!
You can get it to pose (rear, paw earth, bow etc.)!
Really do find it strangely soothing to trot through forest or gallop along beach. Is this odd? Anyhow, seem to be reasonable number of other odd folks around, if it is. Here are some arty pictures of same. In first one Golden Streak looks disdainfully at a cow on Drowsy whilst turning his back on a momento mori, and in the 2nd we visit a gypsy encampment on Zigana.
Posted by Sheila Yoshikawa at 14:54