No of meetings attended: 2 (good); No. of trees felled: 8 (good); No of trees planted: 7 (good); No. of times have tagged a blog entry with the word "chocolate": 0 until today (surprising: in RL would probably have to tag every day "chocolate")
Invigorated by RL train journey through Peak District (from Manchester to Sheffield; trees and snow look amazing) attended UK SL educators "Second Tuesday" meeting. There were what might be called Usual Suspects in attendance and chat was pleasing mix of banter (new year resolutions; cats; feather costumes; that kind of thing) and useful convo re education. UK educator meetings seems to have higher banter-to-Serious-Stuff ratio which is OK by me. Had not visited Bangor sim (the venue) before so that also interesting. 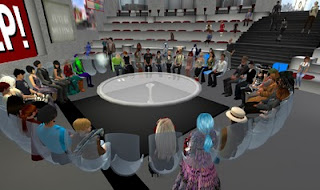 Couple of hours later was the SL educators roundtable, now renamed in 21st century fashion "Virtual Worlds Educators Roundtable", since meetings also take place in other virtual worlds. Was load of people there and lots of discussion (loosely) around points that one of the Linden's had made in a sort of "state of the grid" blog post. Did not make much contribution and at one point inadvertantly turned Voice Chat on (when checking to see whether someone else had an open microphone, ironic really) and AJ IMed me about it, which is shaming. However, did not have any microphone device plugged in so do not think will have been making much noise, unless laptop was providing own conversational contributions without my knowledge. 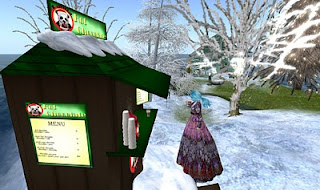 Following this checked up on some of my homes; renewing rent on Babylon 5 room, returning a suspicious looking item to its owner from my main home, and also having a look at the African sim where Graham is renting some land. All the African heat reminded me that was intending to make Infolit even more wintery, so tp-ed back, adjusted the ground textures a bit to get full snow in NE corner of Infolit iSchool, and changed trees around greenhouse to wintery ones. Also added an extra winter deer and suddenly remembered had Hot Chocolate Hut in inventory, and put that in too. If you click the cups or dispensor you get mug of warming chocolate with usual drinking animation that throws beverage in rough direction of face. Can then go and bother the deer. No dogs though, please.
Posted by Sheila Yoshikawa at 18:42

I think it is called "quaffing" - the throwing-drink-in-face-approximity.

is whole chocolate thing is v sad. I wish that we could leave our RL hangups outside of SL. But no. They do follow. Some aspects of our identity seem to be more 'sticky' and follow us online.