In memory of Bluewave 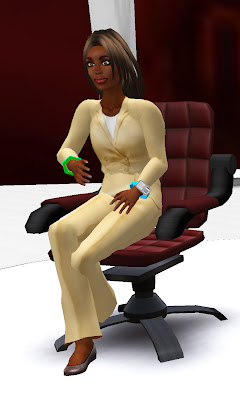 This is a serious blog entry, as you can't get much more serious than death. A couple of hours ago I heard that someone who I admired and liked greatly in Second Life died last night. I knew her mostly as Bluewave Ogee: in the physical world she was Professor Leslie Jarmon.

When I saw the subject line on the SLED discussion list I was first disbelieving, and then stunned. She was one of the co-founders of the Educators Coop, and after I got to know her co-founder, North Lamar, I was invited in, even though I wasn't renting Coop land. It has been wonderful being part of the Coop, a group of people to chat with, learn from and share frustrations with. Bluewave was always helpful, always encouraging, a real leader and mentor. People say a lot things about people being loved and inspirational in obituaries (which I suppose is what I am writing) but Bluewave was those things.

I suppose I will be getting increasing numbers of cold shocks from electronic messages beamed out to discussion lists or twitter - deaths of real friends, but who are not so close that I would be someone who was told before all the others who will be mourning too. There is a memorial set up on the University of Texas sim at http://slurl.com/secondlife/UT%20Austin%207/118/86/29 with pictures of her in both lives and a box to post notecards with tributes and memories. I teleported in and left a notecard and exchanged words with people there, but there wasn't anyone I knew. 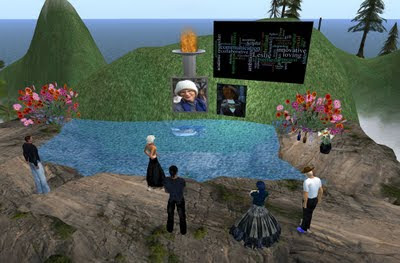 Then I saw that North had come inworld, and when I checked on the map there was someone on the newest Educators Coop island, so I teleported over and he was there at a memorial that Rx has made. Bluewave was North's advisor for his PhD, and he had been with her shortly before she died. I learnt a bit more about her family, and her illness, but mostly it was good to be in the Coop, with North, who I think must have introduced us, and who must feel her loss greatly. While we were standing there, North sent out a message to the Coop group, and so gradually a few others arrived.
The second picture shows us there: we are adding flowers around the pool and North put up a word bubble that a friend of Bluewave's had made.

North said that she had sent a message for the Educators Coop members "tell them it's been REAL". It is real, and that means the loss is real too. Going back to find a decent picture of Bluewave I remember the many Coop meetings, the visits, Coop projects ... it seems impossible that she won't still be part of that. She had just had an amazing success: Texas had bought 50 islands, to invest significantly in SL as an environment for learning, and her leadership had managed that: so it will be a loss for SL education too. However what I will miss most is the chat, the IMs to "Dear Sheila!" 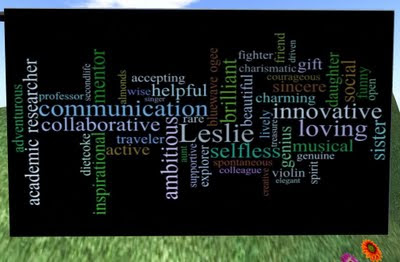 Don't think I'll be putting any jokey tags on this entry.
Posted by Sheila Yoshikawa at 14:47

Blue is the first person I have knowingly "lost" from my friends list. I didn't know her as well as you but liked what I saw. Was with Fleep, Troy, Max and Lexi at the UT memorial for a while. Some sadness, contemplation but positivity too. Love her last message to the Coop. Thanks for sharing.

Thanks for this blog post, Sheila. I was not able to attend the Coop meetings this semester like I had in the past; I never met Leslie in person but only knew her through Bluewave in Second Life. I exchanged an IM conversation with Leslie/Bluewave about a month ago. I will miss her very much.

Hi, Sheila. We included a link to your post about Leslie in the UT Web article on her passing. I encourage anyone who knew Leslie to read and comment. Thanks.
http://www.utexas.edu/news/2009/12/04/innovator-passes-away/

Thank you for that

Dear Shelia,
My name is Hope Moon and Leslie was my Aunt. It's been years now but I want to thank you for expressing such warmth and compassion for her. I know that she was positively enamoured with second life and loved to express how wonderful everyone was that she met through it. She considered all of you her friends and spoke about learning from you everyday. Thank you for being a part of her life and remembering just how wonderful she was.