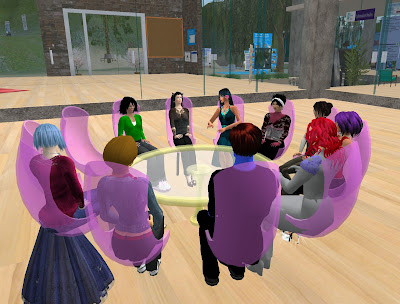 Discussions held on Infolit iSchool: 1 (v. good)
Have finally resumed Infolit iSchool discussion series. Kicked off last Thursday with Pancha, Ishbel and I giving our picks from the LILAC (information literacy) conference. With due modesty none of us talked about our own session. Which - now I come to think of it - haven't actually blogged here, so will mention at the end.
Ishbel talked about Andrew Walsh's session on using mobiles (that is cell phones to American readers and Handys to German ones), Pancha talked about Peter Godwin's, which also focused on mobiles, and I talked about Sally Patalong's account of 2 modules (credit bearing) that she runs. Those are the speakers RL names, of course. Was mix of UK and North Americans at this discussion, and a couple of non-information/library people, and it was actually a good number for a good discussion. The chatlog is posted at http://sleeds.org/chatlog/?c=397 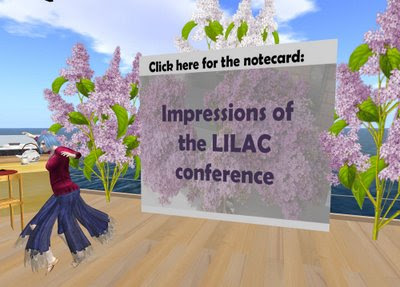 After it was over, was taking down LILAC-y stuff (well, in fact was doing a little celebratory dance in front of poster - see right) when Togashi turned up, and we had a chat. Then I wondered off and bought hair, harpsichord, and tented platform, as discussed in last post.
So, in a previous post I talked about preparing for the session that Pancha, Ishbel, Maggie and Lulu and I did at LILAC. Things went roughly to plan, except that of course we had too much to talk about and so had to abbreviate things a little. The main technical glitch was on sound. Idea had been that Pancha, Ishbel and I (in RL) would use a microphone so that Lulu and Maggie (in SL) could tell what was going on. However we hadn't practiced this bit enough and it soon became obvious that what went in the microphone was feeding out into the speakers in the room, only a few seconds later. Was no way we could turn speakers off, so abandoned microphone. 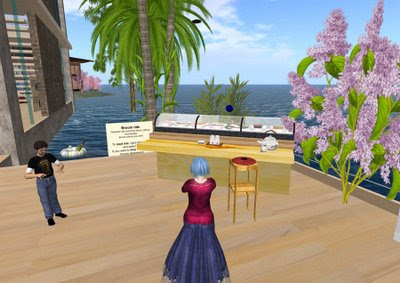 Do you know it is only as I am typing this now that I realise that all could possibly have been saved by plugging the microphone into MY laptop (which was operating slowly but steadily with my 3G mobile stick), rather than into Pancha's laptop (which was the one plugged into the data projector). Oh well.

Main thing was that SL stuff projected fine to screen, Ishbel showed off the management school at St Andrews' island, I showed the 7 Pillars model, Pancha showed her intellectual property stuff and Maggie types in her contribution.
We didn't use a ppt as PowerPoint, but we did do a handout, which is linked below. We also created a delicious account, namely http://delicious.com/LILACSL
Aspects of information literacy in virtual worlds
View more presentations from sheilawebber.
Posted by Sheila Yoshikawa at 15:07